Pune’s Savitribai Phule University is in the eye of storm after it issued a circular requiring students to be vegetarians and teetotallers to be eligible for a gold medal.

The varsity issued a circular on October 31 listing “vegetarianism and abstinence from alcohol” as conditions for a student to be eligible for the medal.

Following the controversy, the  SPPU administration clarified that the circular regarding the award is ten-year-old circular and the conditions for eligibility have not been decided by the university but the trust which is sponsoring the award. 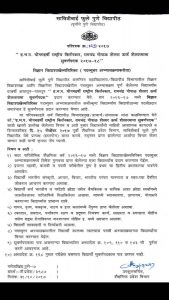 The award is constituted in the name of Ramchandra Gopal Shelar alia Shelar Mama, a kirtan singer who promoted yoga and Hindu traditions. It is no surprise that the circular mentions that students practising yoga and pranayama will be given preference. “Student who practices yoga and pranayama and meditation will be given preference,” reads the circular. The medal is sponsored by the trust and family members of Shelar Mama.

The circular said that besides the “vegan and tee-totaller” criterion, the student should believe in Indian culture, tradition and practice all these values in his daily life and should be versatile in activities like dance, singing, eloquence and theatre, PTI reported. 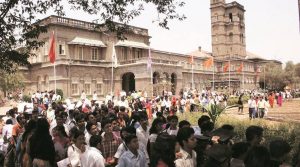 While the teetotaller clause is partly understandable as the legal age of drinking in Maharashtra is 25, the clause of being a vegetarian has put the university in the dock.

Reacting to the development, Yuva Sena leader Aaditya Thackeray wondered if it was a varsity or a restaurant.

“This diktat should be withdrawn. Focus on studies instead. Rather than bothering about who eats what, pay attention to how students will get jobs,” Mr. Aaditya said.

“Give a gold medal to those who issued this diktat and dismiss them,” he added.

Shocking disappointing decision by Pune University – so proud of education in our state, What has happened to our universities . Please focus on Education not food.

The move has sparked outrage on social media and among student groups who alleged that the varsity is trying to push “a certain ideology”.

Pune University announced a new rule, students who are vegetarians and teetotallers will be considered eligible for receiving gold medals! _ pic.twitter.com/0DsZtp6XrE

In a country where 71% people are non-vegetarians, why this “reservation” for the 29% vegetarians?

Next year, the gold medal to be offered only to those who consume GauMutra & Gobar?

I don’t know how the #PuneUniversity is going to verify if student is vegetarian or not?