Poonam Todi, daughter of an auto-rickshaw driver, has emerged as state topper in the Uttarakhand Judicial Services Examination 2016.

A resident of Dehradun’s Nehru colony, Poonam achieved the feat in her third attempt. She had cleared the written exam twice earlier also, but could not make it beyond the interview round.

“I have been preparing for this exam for four years. I briefly attended coaching classes for the exam in Delhi… for the interview, I joined classes in Dehradun. This was my third attempt, and I am happy that my hard work has finally paid off,” Indian Express quoted her as saying. 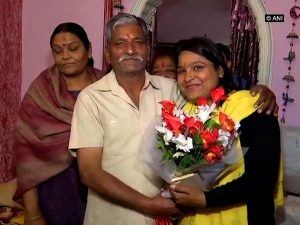 “I have worked really hard for this. My family has supported me in every step. My father is an auto-driver but he never let financial constraints come in my way. I will perform my duties honestly,” she told ANI.

Her proud father Ashok Todi, who earns an average of Rs 300-400 per day, said that he “never differentiated between my daughters and sons.”

“In order to ensure that the children have a good future, we often compromised on our own needs and I am extremely happy that my daughter has now made not only me but the entire state proud.”

Poonam started off as a commerce student but her desire to contribute in some way to the society, led her to pursue law.

After completing her Masters in Commerce from DAV PG College, she did her LLB from the same college.

When asked about her advise to budding aspirants, she said,”One should not get disheartened by failures, these examinations are ultimate test of knowledge and endurance.”