Amidst the ongoing board examinations, the Imams from Bengal’s Murshidabad have joined hands to create awareness among children against cheating in examinations.

The initiative, launched last Friday, aims to dissuade students from cheating in exams on the premise that such practises are against the tenets of Islam, The Hindustan Times reported.

Equating cheating with theft which is forbidden in Islam, Ahasan Hasib, an imam of Rusulpur mosque in Domkal of Murshidabad, said the initiative was taken following request from parents of students appearing for the exams this year.

“We have plans to launch similar post-Namaz campaigns before the forthcoming Uchha Madhyamik (higher secondary) examinations,” he added. 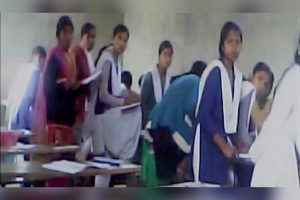 Mass cheating at a Bihar University

The region’s Imam-Moajjem Association has also decided to approach their counterparts in other districts to spread this campaign in other parts of the state as well.

Earlier, Murshidabad district administration has taken help of the imams to create awareness among the community on various issues including polio vaccination, building toilets, etc.

Uderlining the need to create awareness againt cheating, Mojaffar Khan, president of the association, said, “Anyone getting a degree through cheating and later a government job will not able to deliver proper services to the citizens.”

He also stressed that cheating in examination is tantamount to cheating the society and added that efforts should be made to stop this evil practise.