The Delhi High Court has directed the Jawaharlal Nehru University that the varsity cannot punish its students for lacking in attendance till the time the matter is being heard in court.

Reacting to a writ petition against JNU’s attendance policy, a single-judge bench of Justice Siddharth Mridul said, “no coercive steps be taken against students, in pursuance to the attendance requirements, now introduced on behalf of JNU, during the pendency of the petition,” Times of India reported

“Needless to state that the above direction shall be subject to the outcome of the petition, and no equities shall be created in favour of the students, in the event, the court uphold the decision of the JNU,” he added.

The petitioners have alleged that the university management had issued a circular in December 2017, saying it was planning to make 75% attendance for all courses compulsory.

As per the new circular, students who fail to comply with the attendance rules would be debarred from taking exams, availing fellowships and scholarships, retaining seats in hostels or having access to medical facilities. 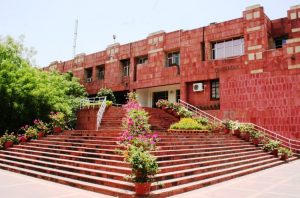 The High Court’s direction came on a petition filed by Kavita Singh, dean, School of Arts and Aesthetics, JNU, and others against the varsity’s attendance policy.

Jawaharlal Nehru University (JNU) has made it voluntary for the students to join the JNUSU. Now it’s optional for students to pay  the students’ union fee of Rs 15 during registration for the new semester.

The university said that its Statute 33 states that membership of any students’ organisation is voluntary and therefore, students were being made to fill a separate ‘self-declaration’ form and asked if they wished to pay the students’ union fee, No Coercive Step Against JNU Students On Attendance Till Court Decides reported.

Slamming the varsity’s move, JNUSU claimed that it was the “first step to demolish students’ union in JNU”.

According to the union, the University has done away with the earlier practice of including the JNUSU membership amount in the students fee and will now provide them the option of not joining the students’ body.