In Delhi, commuters who could not help but run their vehicles on the wrong side of the road just to save themselves a few minutes, need to be a bit more cautious now.

A Delhi traffic police court threw two cab drivers behind bars after they were found dangerously driving on the wrong side of the road near Kamla market. Riyazuddin and Marghoob Rehman were in a hurry to pick up their respective passengers and wanted to avoid a traffic signal and a U-turn.

The cabbies were booked under Section 184 of the Motor Vehicles Act, Times of India reported. The two were first issued a court challan and ordered to appear before a judge. However, when they turned up to pay the challan, the metropolitan judge (west) Abhishek Kumar sentenced them to one month in prison. 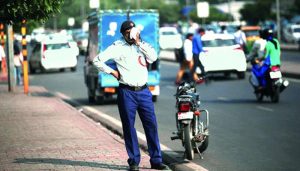 The court also found that the two drivers, residents of Paharganj, were not only on the wrong side but also driving at a high speed Driving down the wrong carriageway has become commonplace among commuters in National Capital Region. However, the fines on challan do not reflect how rampant this practice has become.

Only 8% of fines for wrong-side driving only comprised 8% of the 7 lakh challans issued by police; in Noia, where the problem is perceived to be more serious, the total percentage was 5% (of 147 lakh challans), said TOI report dated May 8. Traffic cops have been pushing for jail terms for drunk or rash driving.