It has been over a week and the protests against Citizenship Amendment Act, 2019, continue to rage across the country. A video from one such protest has gone viral and shows a group of female students shielding their friend from the police lathi-charge.

In a similar instance, a group of women in Bengaluru, where protesters have gathered defying prohibitory orders, formed a human chain to protect the male protesters from getting detained. The incident happened during a protest held at Government Arts College women.

In an image circulating on social media, women are seen standing hand-in-hand, forming circle around men.
Shubham Negi, a protester took to Facebook to narrate the incident:

“I was at a student-led protest in Bangalore today and despite the risk of life and being arrested, a lot of people turned up. (Section 144 is imposed here.) But the most empowering part of the protest was not that. It was the women.”

The post mentioned that women did what they did in lieu of the rule which says women cannot be arrested after sunset and before sunrise.

Last week, the video of female students from Jamia Millia Islamia were seen shielding their male friend who was being lathi-charged by the police had gone viral on social media. One of the girls, who was identified as Ayesha Renna, was also seen shouting “Peeche chalo, you can’t come here… go back.” Her raised index finger has made it to many a poster in the ongoing protest marches.

How to rescue a victim during a #lynching incident.
Real life demo by women students of #Jamia

The image of three women standing over a wall raising slogans outside the Jamia campus had circulated on social media. 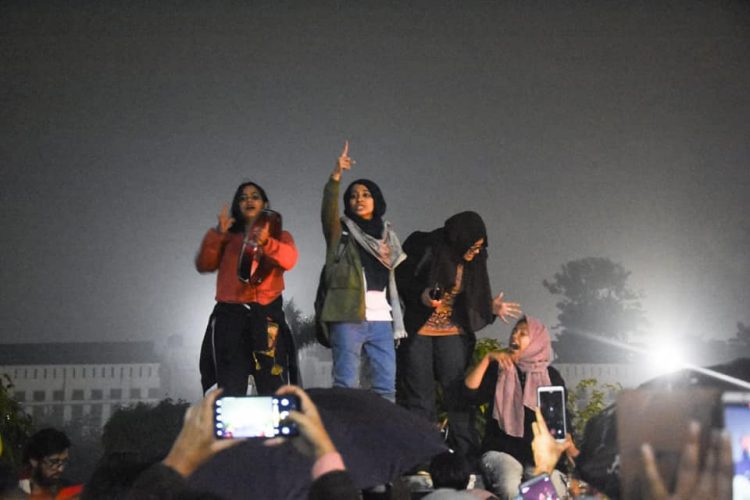 Protests have erupted in multiple cities across the country after the Citizenship Amendment Bill (CAB) became a law after receiving the President’s assent. The Bill seeks to amend The Citizenship Act, 1955 to make Hindu, Sikh, Buddhist, Jain, Parsi, and Christian from Afghanistan, Bangladesh, and Pakistan, eligible for the citizenship of India. Muslims are the only community to be excluded.