In the recent Pulwama attack that resulted in the death of 40 CRPF jawans has sent shock waves across the nation. However, in the hour of grief, the entire country has come together to support the bereaved families of the slain soldiers. Individuals and groups, irrespective of their soci0-economic background, have come forward to help them. Among these individuals is a beggar who donated Rs 6.61 lakhs to the families of the martyred jawans. Nandini Sharma eked out a living by begging outside Ambe Mata temple in Ajmer’ Bajrangarh.

Speaking with inuth.com, Sandeep Gaur, one of the trustees of Ambe Mata temple said, “Sharma used to beg outside the temple and at times helped us clean the temple premises. She often came to us for help as her savings were snatched away by miscreants. So we tried to help her open a bank account here so she could deposit her money, but since she did not have any identity proof we were unable to do so.”

She requested Gaur and his friend Ankur Aggarwal, a medical shop owner, to open a joint account where she could save her money.

“For nearly seven years, she gave us money and we deposited in on our joint account. Before she died six months ago due to old age, she had requested us to use her money for a noble cause,” he added. 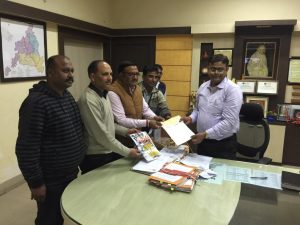 Gaur and Aggarwal waited for a right opportunity to donate the money after her death. Post Pulwama attack, the duo decided to donate it to the families of the martyrs of Pulwama attack.

They visited the district administration office on Wednesday and expressed their desire to donate money to the Chief Minister’s Relief Fund, which was collecting money for the martyr’s families.

“A woman had saved over 6 lakh rupees and it was her last wish that this should be used for a good cause. The custodians have handed the cheque to me. It is an appreciable gesture and hopefully, it will inspire more people to come forward and donate.” Vishwa Mohan Sharma, Collector of Ajmer, told ANI.