In an overzealous attempt to teach a lesson to Bengal’s youth for posting “obscene online content”,  Kolkata Police named and shamed a third-year college student for running a Facebook page named ‘Specified Tarkata”. The admin of the page Manimay Aich was arrested on 21 December, 2017 for allegedly posting defamatory and abusive memes about Netaji Subhash Chandra Bose and Swami Vivekanda. However, Kolkata Police went a step ahead and posted his pictures on their Facebook page. They also put out the details of his residential address, educational qualification with a comment saying, “we won’t tolerate such bad behaviour.”

Kolkata Police didn’t forget to write a line or two about the hard work their cyber cell had put in to tracking down the Physics student in a long post. “We got the results of the cyber cell’s tireless work last night. We will stay silent on how we tracked this guy down but the good news is the creator of serial offensive memes has been caught. ”

A few hours later, realising their blunder, the state police Facebook page took down the photo of the boy and replaced it with a blurred photo . 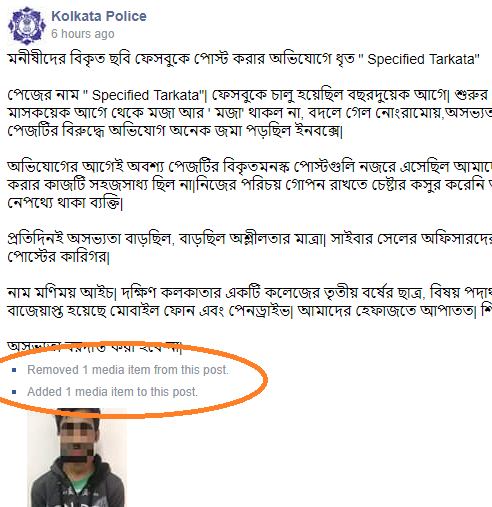 This move of the Kolkata Police irked some Facebook users. One agitated user wrote: “Dear Kolkata Police, why do you pretend that you have caught a big fish after catching a small fish? If you are so efficient, why don’t you crackdown on pages spreading communal violence.” Another user posted these questions: “1. Under which section of the IPC was the boy arrested?, 2. Can Police reveal the identity and release a picture of an accused, even before his crime is proven?

While most users were in agreement that Aich’s memes were in bad taste, they felt arresting him and shaming him was not the right thing to do.  Some users poked fun with comments like, “finally, Kolkata Police has learnt how to photoshop.” Again, there were other users who supported the action of the Kolkata Police. “He deserves a good smacking from the Police for misusing freedom of speech in the name of dark humour.”

Commenting on this issue, Jadavpur University professor Ambikesh Mahaptra, who made national headlines after being arrested for circulating a cartoon of Mamata Banerjee in 2012 said that Kolkata Police should have been more careful in handling the matter that involved a young boy. “They could have issued a warning or censored his page. They could have waited for him to respond to their warning. To go and arrest a college student for running a page, shows how lopsided their priorities are. ”

The Indian Express reported that the Kolkata Police acted on the case after they received complaints about the content posted by ‘Specified Tarkata’. Apparently, the content of the page was seen as humorous till the time it was posting morphed pictures of actor and actress. However, slowly the page started creating cartoons of freedom fighters and political leaders which were allegedly derogatory in nature. This angered many followers of the page, prompting them to report it to the police.