Patanjali had launched its messaging application “Kimbho” on Google Play Store, touting it as a revolutionary new app that would serve as competition to WhatsApp. But, the yoga guru’s followers yearning for a swadeshi messaging app were in for a rude shock as it was unceremoniously removed from the Play Store.

The app, which had apparently raked in over 1 billion downloads on the Play Store, came with the tagline “Ab Bharat Bolega” (Now India will speak). IANS reported that “Kimbho” is a Sanskrit word that means “How are you? or “What’s new?”, according to Patanjali’s spokesperson SK Tijarawala.

Even though the app seems to have disappeared on WhatsApp, there seems to be someone’s version of the app up on the Play Store. However, we couldn’t verify if the app is the one launched by Patanjali. 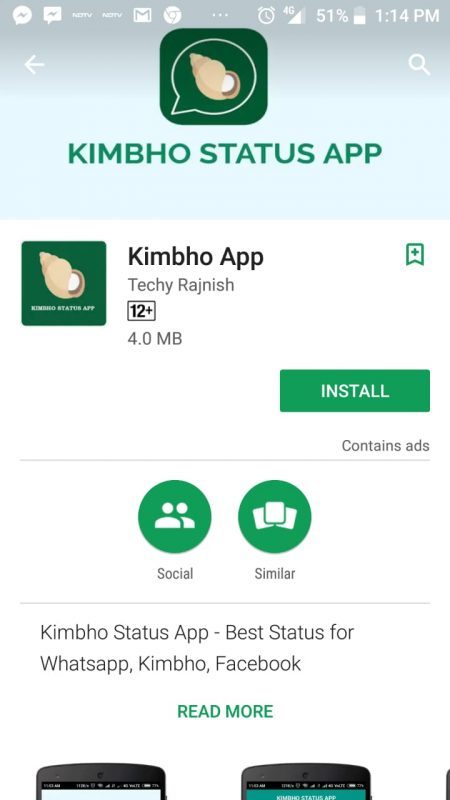 Screenshot of the unverified app on Google Play Store.

It’s episodes like these that trigger the Twitterati’s creatives juices. As #SwadeshiKimbho began trending, here are some of the choicest reactions.

The app of love

Irony Is They Are Using #Pakistan Actress Mawra Hocane’s Pic On Playstore And Tagline As “Ab Bolega Bharat”. #PatanjaliSIM pic.twitter.com/fXIbGI2LOM

I just hope Kimbho is a very bad dream and we all wake up to ‘gd mrng frndzz’ msgs on Whatsapp.

Why are friends so uncool!?

I just install our swadeshi massaging app #Kimbho but unfortunately no one in my contact is using this app#patanjliproduct @yogrishiramdev @Ach_Balkrishna pic.twitter.com/jNkIWLFwXP

I hope #KIMBHO will not ask me link my adhar card

Please don’t make fun of the name of @KimbhoApp

The truth is, it actually stands as a nod to a secret cow-dung pact between N. Korea and US that was signed during Obama’s presidency.

Baba Ramdev claims his #kimbho app will give competition to #whatsapp.
Feels like Harman Baweja claiming that he is a threat to Leonardo Di Caprio’s career.

The launch of the app comes soon after the announcement about a partnership between Patanjali and BSNL to launch ‘swadeshi’ SIM cards and talk plans for employees, The Indian Express reported. Patanjali later confirmed that the rumours were false.