Earlier this year, Julian Boruah from Assam floated a “strange” idea only his friend Anupam Deka, a local entrepreneur, and few state forest officials seemed to be sure about.

“I wanted to take Rhino’s story to every corner of India,” Boruah recalled during an interview with InUth in New Delhi, last week.

Pooling up a small amount from his earnings and from that of his supporters, Boruah started a ‘Pan India Save Rhino Awareness Campaign‘ bike journey on March 15. During the journey, he will ride across every state of India on his bike to raise awareness about conservation of Indian rhino.

Until now, Boruah has already covered more than 14 states and Union territories, covering around 15,000 kms.

“I am not a professional biker so it was tough for me during the initial days and the roads in many states were not friendly. I got backache and other problems but then my body got accustomed to biking,” Boruah, dressed in a biker outfit with an Assamese Ghamocha around his neck, said.

While India’s story of rhino conservation is acclaimed worldwide, what worries Boruah is the threat posed to the rare species by poaching and floods. His worry is not misplaced. According to government figures, 170 rhinos were poached between 2009 and 2015 at Assam’s Kaziranga National Park – the home to rare one-horned rhino  – alone.

This is why Boruah started his journey from Kaziranga, a UNESCO world heritage. However, he doesn’t shy away from revealing a personal experience, that eventually became his inspiration.

“My son, who was two years old in 2012, was suffering from acute pneumonia and we had to bring him to Ganga Ram hospital in Delhi for treatment. He underwent two surgeries at the hospital and we brought him back from the jaws of death. It was then me and my wife decided to do something. Like our son, we decided to bring back rhinos back from the jaws of death,” Boruah said. 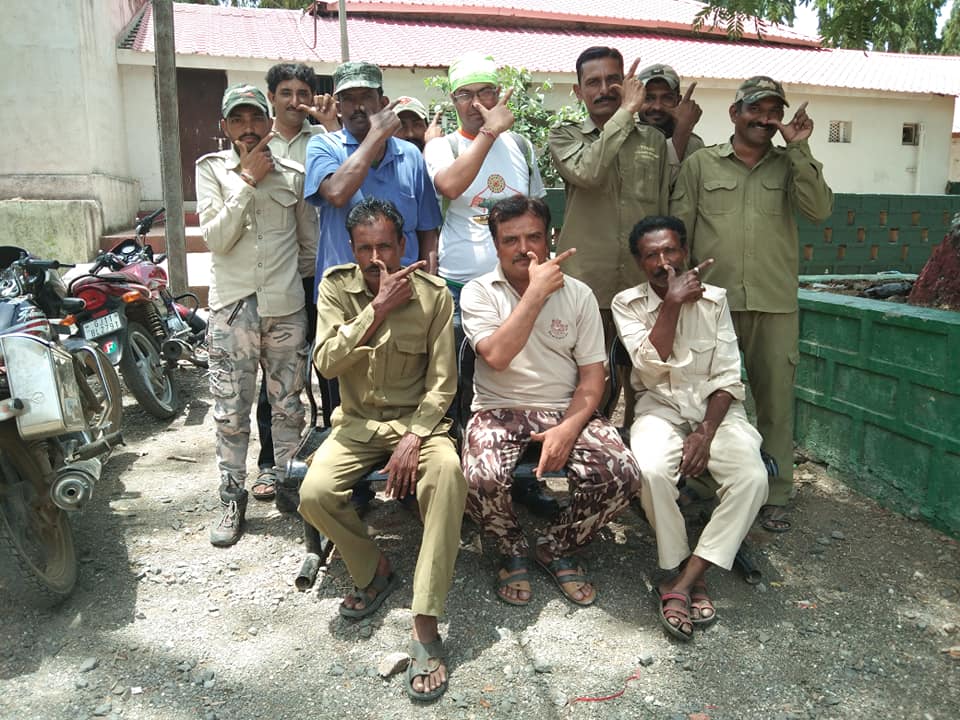 Boruah posing for a photograph along with a group of forest guards early this month | Source: Julin Boruah/Facebook

The journey so far, Boruah said, has given him a new perspective on the problem of poaching. He argues the conservation authorities need to focus more on increasing capabilities of forest guards by providing them adequate financial perks and infrastructural support.

“Poachers have more sophisticated weapons than forest guards. They also have money to throw away at guards to remain silent. The guards need advanced training and better weaponry to fight poaching. This is what I have understood throughout my journey and I am trying my best to convey it to forest ministers of every state,” Boruah, who’s scheduled to meet Prime Minister Narendra Modi soon, told InUth.

According to Boruah, from finances to meeting top officials of the states, he has got “enough support from Assam’s forest department and some of his friends” to get through so far.

“I wasn’t sure whether I’ll be able to finish the journey or not. Now, I have completed nearly 60 per cent of the journey so far,” he said, adding “I am yet to finish North India.”