Sanitation workers on Tuesday staged a massive protest against the Noida Authority in sector 10 area of the city over non-payment of salaries. These workers, who have been working with the Noida Authority since the past 25 to 30 years, have alleged that they haven’t been paid salaries since past three months. Even on repeated requests, the authority hasn’t paid any heed to their demands.

These contractual employees do not have a stable monthly income but receive daily wages. But at a time when Prime Minister Narendra Modi’s demonetisation policy has created a situation of a severe cash crunch in the country, there is an existential crisis for these daily wage workers.

“We are frustrated. Our children haven’t had food since days. We haven’t received salary since 3 months,” said an angry protestor. 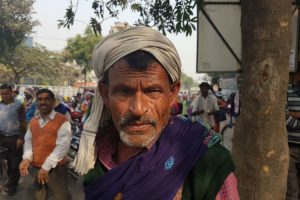 “How should we feed our children? We can’t even send them to school. It has been 3 to 4 months but no payment has been made so far,” said another protestor.

Yes, there is cash crunch. Every person is trying to save the cash in hand. But is the Noida Authority using demonetisation as an excuse to not pay salaries to its workers?

Demonetisation just came into effect a month ago, but these workers haven’t been paid their salaries for the past three months. They don’t have any money to pay their house rent or even feed their families. All that they are demanding is their basic right — their hard earned money.

Also, they are not asking for salaries to be paid in cash. They are ready to get their bank accounts created for easy transfer of money. But to no avail. However, the one demand that they are putting forth is that of removal of the contractors, who work as middlemen between the authority and the workers, thus giving rise to red tapism in the process.

According to some protestors, the contractors receive 2.50 percent commission from the Noida Authority for employing contractual workers. Seeking an end to the contractual employment, The sanitation workers claim that contractors have been using the system to benefit their friends and family while paying no heed to the issues of the workers. 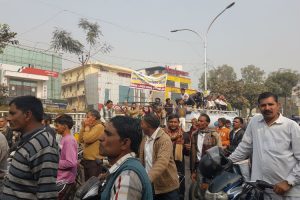 The protestors even allege that on several occasions when they tried contacting the government to raise their concerns and lodge their complaints, the officials, and the supervisors threatened them to sack them from their jobs.

“We tried talking to the government. But they aren’t even letting us stand at the gate of the building. They simply ask us to leave. Neither any government official nor any contractor is willing to listen to us,” said another protestor.

The protestors are now threatening to stop the work and block electric and water supplies if their demands are not met.

Despite their hardships, they have immense support for Uttar Pradesh Chief Minister Akhilesh Yadav, whom they consider their ‘Raja Sahib’. According to the protestors, the CM is working to make their lives better, but it’s the corrupt officials who are creating issues.

Commenting on the issue, the Noida Authority officials have assured that they will be holding a meeting with the protestors on Tuesday to find a solution to the problems of the aggrieved workers.