A week after Bollywood singer Sona Mohapatra called veteran music composer Anu Malik a ‘serial predator’ for his lewd behaviour against women, another female singer has now accused him of being a ‘pedophile’. In a long Twitter post, singer Shweta Pandit has written how she was harassed by Malik when she was just 15.

Pandit, who has called him a ‘sexual predator’ and a ‘pedophile’ in her Twitter post, wrote that Malik asked her for a kiss during the shooting of the film Mohabattein in 2001. The singer wrote that she cried endlessly after the incident which left her depressed for months. She also accused that Malik, who she referred to as ‘uncle’, is known to have exploited many other singers in the industry.

Had to go back to my worst memory as a teenage girl today to write this and speak up – its now or never. This is my #MeToo and have to warn young girls about #AnuMalik & let you know your #TimesUp @IndiaMeToo
Thank you @sonamohapatra for speaking up about him & supporting this pic.twitter.com/e261pGQyEq 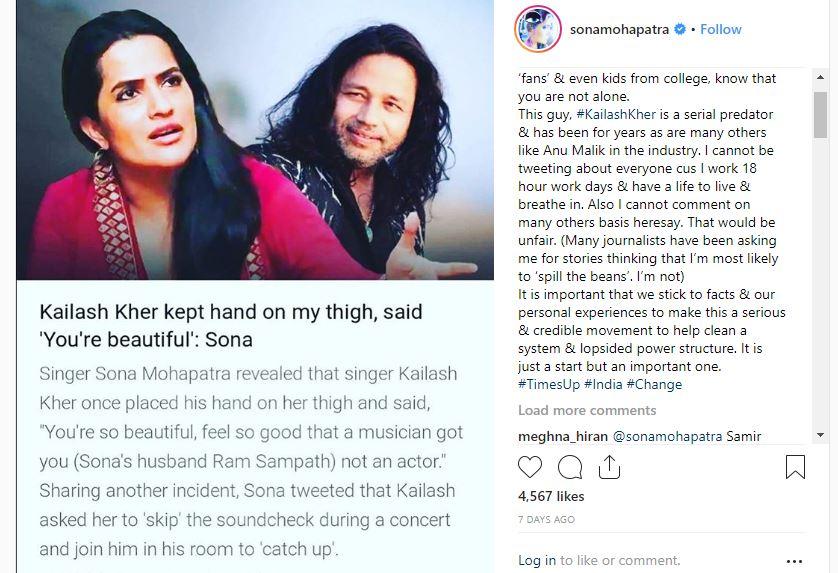 Last week, Sona Mohapatra had called out Malik for his lewd behaviour against women. She had narrated how Malik once referred to her as ‘maal’ in front of her husband Ram Sampath at an event in 2006. However, Malik denied the allegations and maintained that he had never worked with Mohapatra. “She’s meaning (sic) some case that had happened long time back. It has nothing to do with me. I have never worked with her also. So, I don’t want to comment anything on it. She’s just dragging my name into this. I have not even met her,” he said, reports India Today.

Apart from Malik, singer Kailash Kher is also facing serious allegations of harassment and misconduct. Two female singers, including Mohapatra, have accused Kher of harassing them, an allegation which Kher has denied.