An Andhra Pradesh legislator is winning praise for his unique crusade against superstition. Dr. N.Rama Naidu who represents Palakollu constituency, spent two consecutive nights in a crematorium to dispel fear of ghosts and spirits among labourer who had refused to work there after dark.

The project to modernise the crematorium had seen many delays as the workers were too scared to enter the premises in the midst of the regular funerals that took place there, The News Minute reported.

“I decided to sleep in the crematorium in order to instill bravery and confidence among the workers, so that they wonder what is their problem if an MLA himself is staying there,” Nimmala told local news channel. 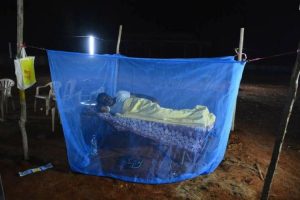 The lawmaker’s ‘ghostbuster act’ has attracted national attention with politicians, celebs lauding him for setting an example by taking the lead in dispelling superstition.

Kerala chief minister Pinarayi Vijayan was rather effusive in his praise for the TDP MLA.

TDP MLA Nimmala Rama Naidu deserves praise for spending a night at a crematorium where workers had refused to enter after dark to do modernisation work out of fear of ‘spirits’ pic.twitter.com/NLvP2yzNnw

Nimmala rama naidu MLA of TDP in andhra pradesh spent his three days in cemetery to show labours that there is no ghost here.good example for rest of polticians

Kudos to him. Longing to see more like him

“Andhra lawmaker’s ghostbuster act caught the attention of Kerala CM, who put out a series of tweets appreciating Rama Naidu.

Rama Naidu’s efforts should attract national attention because his is a fight against frivolous rituals and rampant superstition.”

Hat’s of to Rama Naidu ji
Great initiative against stupid superstitions. He should followed by all over India..
____________