Amid multiple instances of mob violence in India, a 28-year-old man was beaten to death at Alwar in Rajasthan on Friday night on suspicion of cow smuggling.

The deceased has been identified as Akbar Khan, a resident of Kolgaon in Haryana. As per reports, the victim was taking two cows to his village, along with another man, through a forest area near Lalawandi village in Alwar last night, when the duo was caught by a group of vigilantes who brutally thrashed Khan on suspicion of cow smuggling police officials said.

While the other man managed to escape, Khan had to be rushed to a local hospital in Ramgarh, where doctors declared him brought dead, The Indian Express reported.

Speaking with ANI, senior police officer Anil Beniwal said, “It is not clear if they were cow smugglers. The body has been sent for postmortem, We are trying to identify the culprits and arrests will be made soon.” 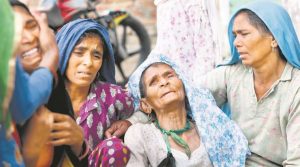 Family of Pehlu Khan, who was lynched by alleged gau-rakhsaks

A case has been registered against unidentified people under Section 302 of the Indian Penal Code (IPC).

The incident of alleged lynching of a person transporting bovines in Alwar district is condemnable. Strictest possible action shall be taken against the perpetrators.

Akbar Khan’s killing comes four days after the Supreme Court had asked the legislature to consider enacting a new penal provision to deal with mob violence and provide deterrent punishment to offenders. Khan’s death comes a year after the brutal killing of Pehlu Khan who was also lynched by vigilantes in Alwar on the suspicion of cow smuggling. Pehlu Khan succumbed to his injuries, and the incident caused massive stir nationwide.