The Piano Man, a popular Jazz club in Safdarjung Enclave, Delhi found itself at the receiving end of a barrage of criticism after they decided to host a band called “BhangiJumping”. For the people who could not figure out what’s wrong with that, here’s some help.

The word “Bhangi” is a casteist slur used to describe “unclean” and “untouchables”. People usually identify them with “filth”.  Often such pejorative terms are used to address and insult the community involved in manual scavenging. The members of the Dalit community staged a massive protest against the Piano Man and tried to explain why they were wrong in so many ways to host a band called “BhangiJumping”. They even boycotted the jazz club and pointed out they were being casteist and derogatory.

However, the club did not seem to understand that. The owner of the club, Arjun Sagar Gupta issued a clarification [Now deleted] saying that the name BhangiJumping was just a form of “artisitic expression” while indicating that those staging a protest were “small minded” people and were being casteists. In his absolute arrogant “apology” he said that he had changed the band name but asked those who chose to boycott the club to not visit the club. He clearly did not understand the whole point. 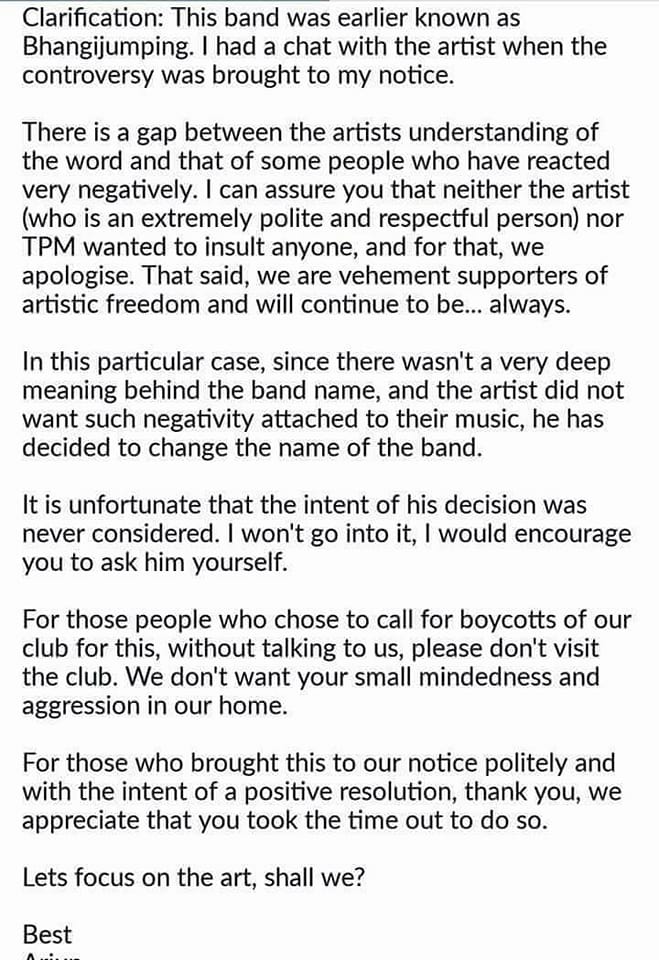 Following the outrage, the “friends” of the owner went all out abusing and slut-shaming the girl who protested and called for a boycott of the Paino Man. A separate petition has been created on change.org demanding a total shutdown of the jazz club. The petition has claimed that the club took no action against the online abuses hurled against the Dalits but rather “liked” the comments. 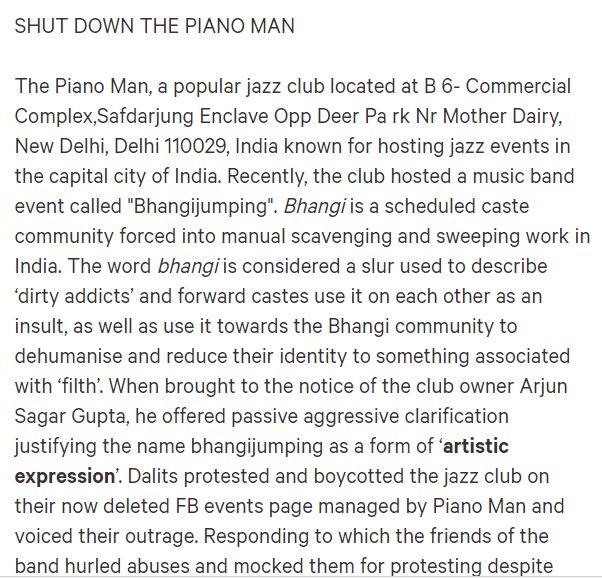 When did the Piano Man Jazz Club finally understand the whole situation and issued an apology you ask? Only when someone pointed out that it was nothing but racism. Because we well-educated Indians can proudly claim to understand the concept of racism and even write long speeches about how racial discrimination was wrong but not casteism, practice with impunity back home.

It was only after the people pointed out that they were being racists is when they figured that something was wrong with the way they have dealt with the situation. It is amusing how we can write long Facebook posts, participate in huge campaigns against racism but fail to even think that casteism is actually linked to it.

Amid criticism, the owner of the Piano Man finally issued a clarification adding that he failed to understand how affected people were and how he failed to understand their point initially. He extended an apology adding that he failed to understand the issue and was insensitive. He affirmed that he missed his own point. “I have never been in such a space, of politics and casteism, so I honestly don’t know how to react. We are way past the point of people understanding intent. Fun is never an excuse for hurting someone else for us, and I see that this is what it has become. As myself and on behalf of my brand, I apologise for hurting an entire community, that is and will never be the intention of what we are doing. I have myself said in the past that words are important and carry meaning far beyond themselves, and in this case, I missed my own point,” he writes on his post. 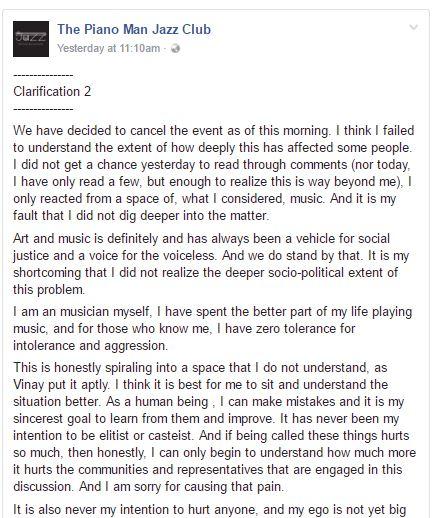 What is problematic is even after the whole fiasco and a detailed discussion on why the event was wrong,  many apparently wanted private performance, something the band backed. Many users also took to social media to abuse women commentators on Facebook, screenshots of which cannot be reproduced here. These instances prove that while in rural India, caste is still a daily reality, in urban centres like Delhi, it is practically impossible to make the elite understand what caste oppression looks like and feels like and why one can’t make light of this grave injustice by naming an event ‘Bhangijumping’.

This post on Piano Man’s page by journalist Dhrubo Jyoti will perhaps help all of us understand why this apology business is just a sham. 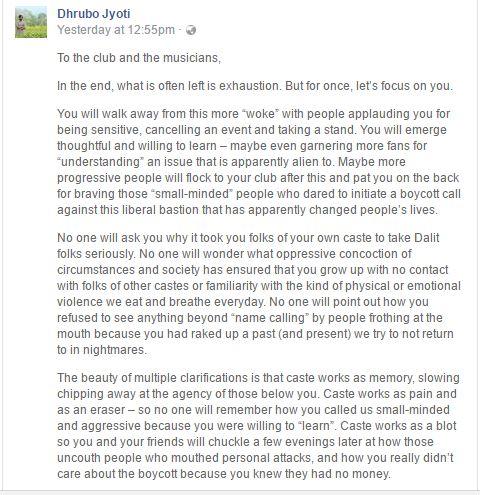 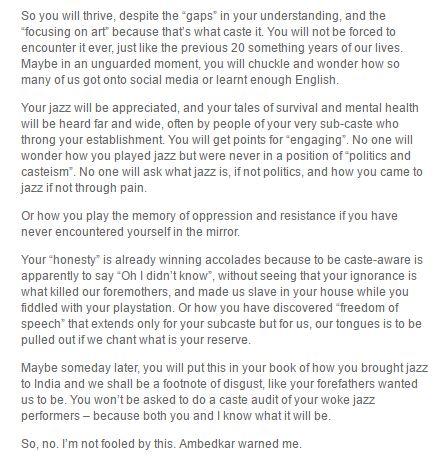