A disgruntled Airtel customer’s complaint about a service engineer’s misbehaviour escalated quickly into religious profiling and discrimination, leaving many on the web appalled.

India’s major telecom company Bharti Airtel has come under fire after it initially succumbed to a user’s demand of a ‘Hindu’ customer service person. On Monday, a customer named Pooja Singh, posted a complaint about the company’s DTH customer service agents. When the social media representative, Shoiab, responded to her complaint, she made a communal remark against him and demanded a Hindu representative instead.

Here’s what she said: 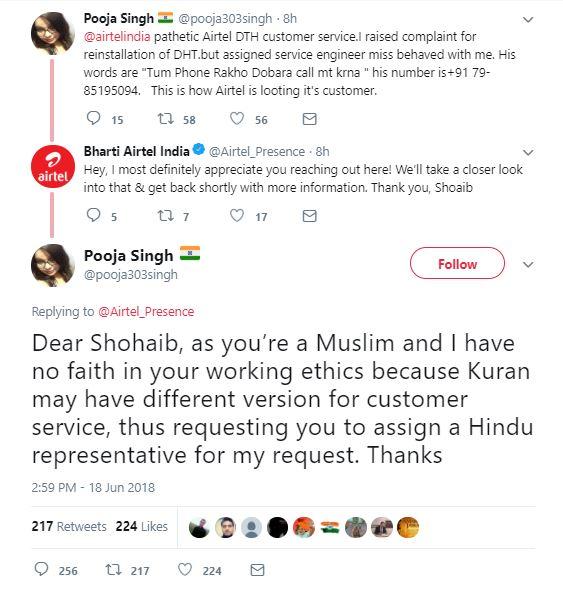 But what really caught everyone’s attention was the fact that Airtel seemed to comply with her demands, and the next person to responded to her was Gaganjot, insead of Shoaib. 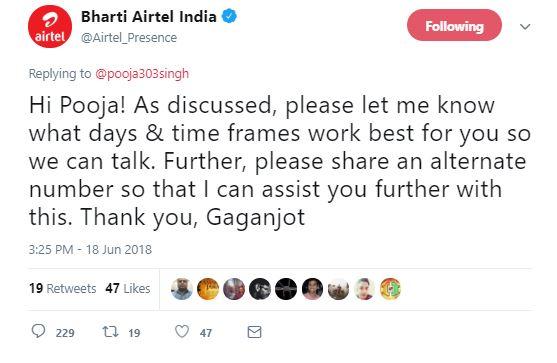 The episode triggered outrage across Twitter with many accusing Airtel of allowing bigotry and communal hatred.

Here are many strong reactions:

Dear @Airtel_Presence this conversation is genuine (I’ve seen the timeline myself). I refuse to pay another penny to a company that condones such blatant bigotry. I’m beginning the process of porting my number to another service provider & canceling my DTH & Broadband. pic.twitter.com/BZxJOaEsN6

I am not surprised at Pooja Singh’s objection to a Muslim’s attending on her. I am shocked and disgusted at Airtel’s accepting her demand and assigning a Hindu/Sikh to her. Airtel should apologizes and promises not to do such cowardly things in future, Or else

Hello @Airtel_Presence, an employee of yours was discriminated on the basis of religion by a customer of yours. Instead of standing up for your employee, you promptly complied with such a bigoted request? @airtelindia pic.twitter.com/OtJPX5iosB

Airtel responded to the outrage five hours later and clarified that it doesn’t endorse discrimination based on religion.