It seems making misleading people with false images have become a norm in these days. On Sunday, power minister Piyush Goyal shared an 8 year old image of streets in Russia to showcase LED street lighting in India. Soon after realising his mistake, he deleted the tweet and replaced it with an image of the Indian streets.

In the latest faux pas of social media, Chhattisgarh PWD minister Rajesh Munat shared a picture of a Vietnamese bridge passing it off as one in Raigadh.

He posted a picture on his Facebook Timeline with the text, “Zila Raigadh Lamdarha Marg Kelo Nadi par pul ka nirman ( Inauguration of the bridge over River Kelo on Lamdarha Marg in District Raigadh)”. 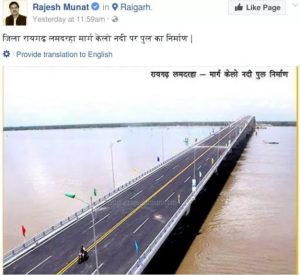 As expected, the image was welcomed by a number of facebook users applauding him for the good work. Among many accolades, this one takes the cake.

However, it later emerged that the bridge in question was in Vietnam. 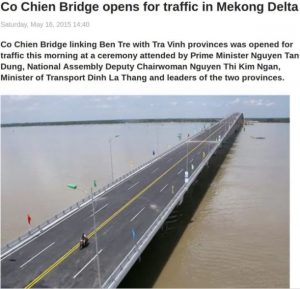 Earlier in April, Union Minister Babul Supriyo had tweeted a representational photo of a bus stop in Rajkot that was yet to be built in Gujarat’s Rajkot saying the bus stand has been inaugurated.