Every year Ganesh Chaturthi is celebrated with great zeal and fervor in Maharashtra. And Mumbai being the epicentre of the annual festivity, buzzes with celebrations for 11 days and ends with the immersion of idols of Lord Ganesha. Every year, once the festivities are over people discard the idols at the beaches of Mumbai, despite the awareness created over the last few years about the toxins they release in the sea. In last two days, thousands of dead fish and turtles have washed ashore on Dadar and Juhu beaches, Mumbai Mirror reported.

On Thursday, city-based-NGO Beach Warriors undertook the task of cleaning Dadar beach post-immersion. However, it was shocked to find the remains of tortoises, heaps of dead fish and water snakes, along with the PoP from immersed idols that had washed ashore.

The fish had died because of the toxic pigments used in PoP idols, as well as the bacterial load from decomposing flowers, prasad and other offerings, Chinu Kwatra, who led the Beach Warriors team of 30 volunteers, told Mumbai Mirror. 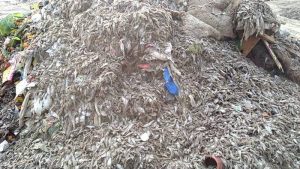 Devotees believe they don’t get “punya” if they don’t immerse idols in the sea but the festival shouldn’t just be for enjoyment; there should be some responsibility towards the environment by using eco-friendly idols and immersing them in artificial ponds, he added.

The Plaster of Paris used to make the idol spells doom for marine life and water bodies. It has the capacity to reduce the oxygen level in water. Additionally, the paint used to colour the idol contain metals such as chromium, lead, aluminium and copper which dissolves into the water and turns into toxic component.