The Indian Railways was left red-faced after it emerged that tickets carrying photographs of Prime Minister Narendra Modi were being issued to passengers at UP’s Barabanki station. The investigation conducted by the additional district magistrate revealed that the ticket rolls with a photo of PM Modi endorsing the Pradhan Mantri Awas Yojana (PMAY) had been used for last 10 days even though the model code of conduct was in place, News18.com reported.

The photograph was part of an Urban Development Ministry advertisement campaign and a portion of the back side of tickets is often used for advertising, PTI reported. 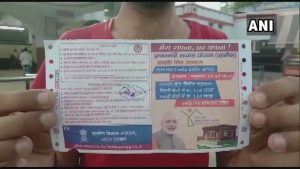 The matter came to light when a passenger bought a ticket on the Ganga-Satluj Express (train number 13308) for his relative and noticed that PM’s image was at the back of the ticket, in violation of the model code of conduct. He tried to bring the matter to supervisor’ notice only to be shooed away by him. As a last resort he called up some people in media to report the matter, India Today reported. Notably, the model code of conduct, besides other things, bars a party in power to use the official machinery to help campaigning for the elections.

This comes days after the railways was pulled up by the Election Commission for serving tea cups to passengers with the slogan “Main Bhi Chowkidar” written on them. Following the charges, Indian Railways said that it had withdrawn the glasses and fined the contractor Rs 1 lakh as punishment.