The National Green Tribunal has held Sri Sri Ravi Shankar’s Art of Living (AoL) responsible for the damage caused to the Yamuna floodplains during its three-day festival in March 2016.

The bench headed by the NGT chairperson Swatanter Kumar did not levy further fine on AoL, saying Rs 5 cr submitted by the foundation in 2016 would be used to restore the plains.

The green body also directed the DDA to assess the damage caused to floodplains and compute restoration cost under the guidance of the expert committee.

However, the panel added that if the charges for the restoration work exceed Rs 5 crore, it would be recovered from Art of Living. 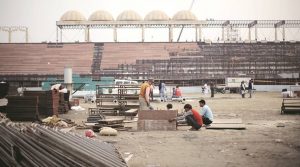 NGT also refused to declare whether AoL was authorised to hold the festival on Yamuna floodplains, saying it’s beyond the body’s jurisdiction.

NGT also rapped DDA for failing to exercise its duty to protect the floodplain.

The DDA has failed to perform its statutory functions of maintaining the ecology. It shall assess the quantum of damage and carry out the restoration work.

The foundation had organised the World Culture Festival, a three-day event to mark 35 years of AoL, on the Yamuna floodplains. Environmentalists and NGOs had protested against the event being held on the floodplains of the Yamuna river, saying it would irreparably damage the ecologically-sensitive zone.

According to a statement issued by the Art of Living, the judgement is “erroneous”. “We maintain that Art of Living has not caused any damage. The judgement is erroneous and untenable. Our submissions have not been considered at all.It is important to note that one of the judges recused himself from the bench just before the judgement was pronounced.We will appeal to the Hon’ble Supreme Court. We are sure that we will get justice there.”