Law enforcement agencies have for long used the services of specially trained canines who have saved many lives and have also helped solve the trickiest of cases with their unique skills. Intelligent, watchful, and protective, squad dogs are irreplaceable part of the police departments.

Honouring the contribution of its two detective dogs Vicky and Henna, Mumbai Police bid an emotional goodbye to the canines who have served the department for 10 years. The canines retired with the same honours accorded to their human counterparts, with shawls draped across their backs by Commissioner Subodh Kumar Jaiswal and coconuts given to their handlers, Indian Express reported.

Of the 568 crimes where the dog squad had provided assistance between 2014 and 2017, they have helped trace perpetrators in 403 cases, while in four cases, they have tracked down the home or place of work of the accused. 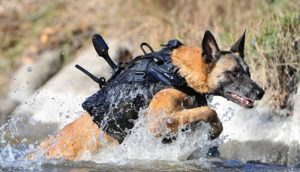 However, Heena had a reputation for tracking down murder suspects. Just like other pups, Heena joined the force when she was two months old and was packed up for a nine-month training with her trainer, Head Constable Umesh Sapte. She was instrumental in catching a murder suspect in Dharavi in 2013 and earlier this year in Khar, she also sniffed out a hidden passage which had led to the escape of a domestic help and her boyfriend after killing her employer in a high rise. The most celebrated of her achievements is the role she played in closing the noose around cable technician Javed Shaikh, who was sentenced to life imprisonment by the sessions court in 2015 for the rape and murder of a minor girl in Nehru Nagar, Kurla East, in 2010.

As a reward for their service,the dogs were rewarded with them being allowed to stay in the kennels they had grown up in instead of being put up for adoption like police dogs before them.

“In the past, when we have given police dogs up for adoption, the persons who adopted them would complain that the dogs were just not used to being with anyone else,” said Sub-Inspector Vinod Ballal told the daily.