Jodhpur and Jaipur have bagged top two spots in this year’s railway station cleanliness survey followed by Tirupati, the Andhra city which sees huge turnout of devotees through out the year.

While Jodhpur was declared cleanest in the A1 category, in category A, Marwar station was adjudged the best, followed by Phulera (Rajasthan) and Warangal (Telangana).

Mathura, a station frequented by devotees to the Krishna temple, was ranked lowest in the A1 category while as UP’s Shahganj station featured at the bottom among the A category stations.

A 160-member QCI-trained team ranked the stations on the basis of cleanliness across the premises, including the main entrance, platforms, toilets, waiting rooms and parking facilities. 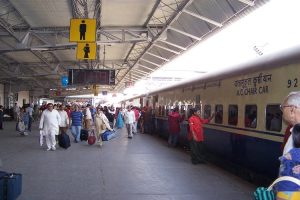 While New Delhi station’s rank stood at 39, same as last year, Kolkata’s Howrah station slipped to 71 from 56. While Mumbai Central slipped to 40 this year from 27, Mumbai CST moved up to 13 from 44. Chennai Central jumped to rank 36 from 49 last year.

The Swachh Bharat Abhiyan launched by PM Narendra Modi was the greatest tribute to Mahatma Gandhi, railway minister Piyush Goyal said at the launch of the QCI report.

“The cleanliness rankings of the stations will be an impetus for improvement for the ones that did not make it to the top of the rankings this year,” said Goyal. There has been significant improvement in cleanliness of stations, according to the survey, he said.