Data published by the Registrar General of India in 2016 revealed that 98% of West Bengal’s population is non-vegetarian, second only to Telangana. But a group of Kolkata vegans have stepped into the limelight — all thanks to a viral post.

A picture of a woman holding a placard and reasoning why she doesn’t eat fish despite being a Bengali has gone viral on Facebook. The picture, which is akin to Gurmehar Kaur’s message of choosing peace over war, was posted on September 8 and has over 1,300 comments as well as close to 800 shares.

But the post may not have gone viral for the reasons they like. Netizens have overwhelmingly criticised the group and their posts for “destroying the society” as well as for propagating, what netizens call, “hate speech”.

However, the group is undeterred in their fight for veganism, saying that their motive is not to force anyone to choose what they should eat but rather to educate people on the pros of turning vegan. They issued a statement in another Facebook post,

“Our previous few posts on fish and a particular community’s predominant dietary habit were intense enough to generate interest, precisely in the rudimentary principles of Veganism and the imminent threats of climate change. Most of us are unaware or conditioned in ways that disparage other life forms, hail them as mere commodities. We are not against any particular community, culture, country, race or religion nor anyone is funding our effort. We are compassionate individuals, we care enough for everyone on earth (yes, including humans and plants too) and intend to continue our activism peacefully.”

‘Kolkata Vegans’ describe themselves as “a group of Vegans in Kolkata who regularly conduct outreaches, awareness programs”. According to their Facebook page, they organise community-building events such as ‘vegan potluck’, picnics, movie nights, photo walks, painting competitions etc. 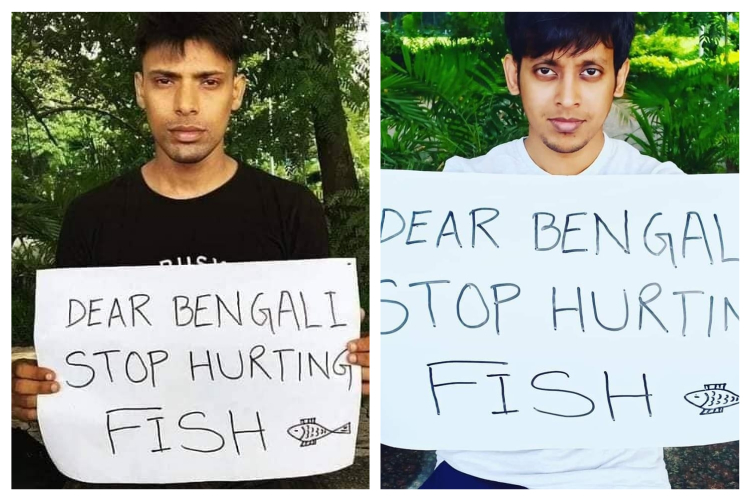 Why West Bengal is a fish-loving state

According to the deputy director of the Anthropological Survey of India, Kakoli Chakrabarty, a majority of Bengal’s population has always been non-vegetarian. She told TOI,

“Since riverine fish are in plenty, Bengal is a fish and meat-loving state. Food habits of any place depends on its ecology. Hence, places that are around rivers or sea will always have a higher concentration of non-vegetarian people as availability of meat and fish is high. In villages, where availability of meat is restricted and ponds are in abundance, people depend on fish.”

Contrary to popular beliefs, vegetarianism in India has been on a decline as per data assembled by the National Family Health Survey. The report states that all but two states — Punjab and Rajasthan — have shown a rise in the number of consumers of non-vegetarian food. However, the data also presents a North-South and East-West divide in the proportion of non-vegetarians. The states with the highest percentage of vegetarians are Rajasthan, Haryana and Gujarat, while Telangana, West Bengal and Manipur have the least percentage of vegetarians.