A recent study by Central Pollution Control Board (CPCB) has found that the water quality of Ganga river is abysmal in Bihar and Uttar Pradesh because of severe faecal pollution.

An analysis of the 2017 official data showed that a dip in the holy river especially in these two states may expose an individual to high levels of fecal coliform (FC), an indicator of the potential pollution of water with fecal material, Hindustan Times reported.

Found in excreta that contaminates water through untreated sewerage, FC Bacteria such as E.coli can put you to a much greater risk intestinal infection if the water is consumed.

In Uttar Pradesh, most polluted stretches were Kanpur, Allahabad and Varanasi. Of the 16 stations surveyed in the state, eight did not meet the desired standards.

In Bihar, FC level were found beyond permissible limits at 88% of the stations. 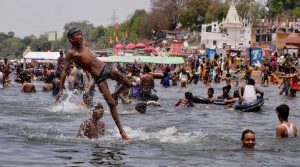 In Allahabad, at Sangam where Yamuna converges with Ganga, the FC level was found to be 5-13 times the permissible limit.

The data from West Bengal was not available but a 2016 analysis of the water quality showed high levels of FC contamination.

The CPCB data shows that Ganga is cleanest as it flows from its source in Uttarakhand with all the station reporting satisfactory water quality.

Despite its importance, Ganga is one of the dirtiest river in the country as it has become a dumpyard for industrial and domestic effluents.

Moreover, the Sewage treatment capacity in the 97 major towns on the river is less than half of the total sewage generated.

Even the much publicised Namami Gange mission has not been much successful. A total of Rs 20,000 crore was earmarked for the clean Ganga mission but the project, according to a CAG report, is not delivering expected results.

The CAG data found that Government had only used 24% of the allocated amount for the flagship programme between April 2015 and March 2017.