A seven year old girl is taking on Delhi Development Authority (DDA) which has planned to demolish a 30-year-old children’s park in her neighbourhood in Delhi’s Rohini. Navya Singh not only filed a petition in High Court but also wrote to Prime Minister Narnedra Modi save the park.

In her two-page letter to the prime minister, she described park as lifeline of children in the neigbourhood. She wrote : “Everyone says you will not read it because you receive 1,000 such letters. But I think you’ll listen to me. This park is our lifeline.”

She concludes with a plea to “Modi uncle” to help her “save her park” because “everyone says you’re very intelligent”.  The DDA was constructing a multi-storey community hall inside a 30-year-old park in Rohini’s Sector 8. 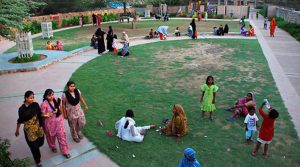 The petition filed by Navya Singh, with the help of her advocate father Dheeraj Kumar Singh, states that “the park in question is also shown as a park in the layout of Rohini Sector 8 prepared by DDA more than 30 years ago, and since then this park was used by [the] public at large.” It expresses that the DDA’s decision to arbitrarily convert it into a community centre is “a clear-cut example of poor planning and an example of wastage of public money.”

Reacting on the petition, the Delhi High Court issued notice to the DDA, NDMC and office of the Lt Governor on a PIL against the DDA’s proposal to construct a community hall inside a park.

In its order, the bench said, “DDA cannot convert a park into a construction (sic).You are playing with taxpayers’ money. Imagine if your officer’s house is converted into a community hall or a wedding centre? Parks are parks. Do not turn them into community centres.”

In June, the residents of the area were surprised when the DDA cordoned off nearly one-third of the park and began construction activities.