1) Monkey beaten up and burnt by medical students.
Not so long ago, in November 2016 body of an year old money was unearthed by the animal welfare activists. The female monkey was beaten up by four medical students of Christian Medical College in Vellore, near Chennai. They crossed the limits by inserting a stick in her rectum and was forced out through the front of her body. Animal welfare activists demand stricter punishment laws after this incident. 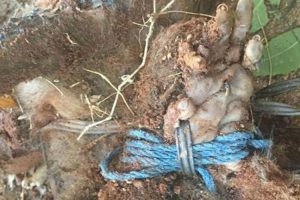 3) Dogs burnt by a group of boys.
Horrifying videos of dogs being killed in the most cruel manner came up that shook the public out. A group of some boys tied three puppies together, covered them with hay, twigs and dry grass and burnt the dogs. They even had the temerity to film the incident and post it on Facebook. The boys were finally arrested for this ferocious act. 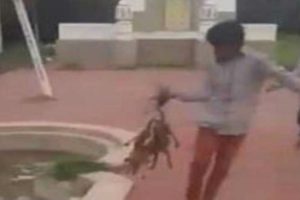 4) Three stray dogs stabbed and a puppy got killed in Delhi.
A day before the above incident, the horrifying case was reported in the Capital city. A man fiercely stabbed three stray dogs and killed a puppy outside Green Park metro station in south Delhi. His brutal act was caught on camera and hence was exposed.

5) A dog thrown off a building’s terrace.
Two weeks before the above episode two medical students threw a dog of a building’s terrace. They too shamelessly captured their disrespectful and fierce act in a video. Although the dog was survived but got it’s leg fractured. The students were fined Rs 2 lacs and were allowed to continue with their education. 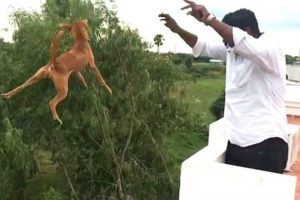 6) A dog whirled around and thrown at a car.
In July 2015 a case that seems idiotic but at the same time is very horrifying was reported. A man was found torturing a dog. He held the dogs’ legs and sprinted him round. He finally threw it at a car parked in the car parking in Delhi.