“If BJP comes to power, it will provide one crore jobs which the UPA Government could not do despite announcing it before the last Lok Sabha polls,” Bharatiya Janata Party’s prime ministerial candidate Narendra Modi said in 2013.

Three years on, lot of things have changed. The prime ministerial candidate has completed over two years as the Prime Minister. But what has not changed is the situation of jobs in the country. In fact, instead of improving, the condition has substantially deteriorated.

During a speech on Wednesday, President Pranab Mukherjee raised the all important question of a dip in jobs in the Indian market. “The job creation figures of 1.35 lakh in 2015, which is the lowest in seven years, are not encouraging. With machines fast replacing men, we have to look at a paradigm shift,” the President said.

Be it the textiles sector, leather, metal, automobiles, gems and jewellery, transport, information technology and handloom sector, the job creation in 2014 was far better at 4.21 lakhs and in 2013 at 4.19 lakh jobs. The 67% fall in the employment generation in 2015 has raised many questions on the tall claims of the Prime Minister. 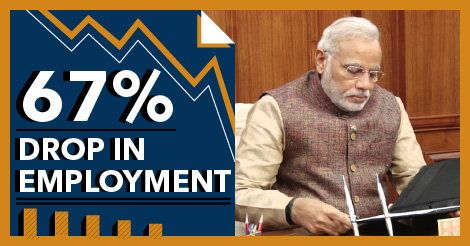 As the President rightly said, “if there are enough jobs in the country, there will be content, refinement and perfection. An opposite scenario can spell disaster. The restlessness and frustration of youth manifests in unrest and upheaval.”

Millions join the line of those seeking jobs in India every year and with India slated to become the world’s most populous country by 2022, the situation may turn worse. An additional 150 million Indians will enter the workforce over the next 15 years thereby increasing the pressure to create jobs and incomes.

Even the government in its Economic Survey tabled in Parliament in February admittted that job creation for millions of Indians who join the workforce every year over the next decade remains a key concern.

Meanwhile, globally, India stands at a very optimistic position. As India is expected to surpass China to become the world’s most populated country, the population of working age in India will rapidly increase while there has already been a decline in the same in China.

Modi, in his extravagant ‘Make in India‘ plan has often said that he aims to create 100 million manufacturing jobs in the next six years. But how practical are those claims?

Also while talking about Make in India, Modi had said that FDI (foreign direct investment), should stand for First Develop India.

But the recent annual report released by RBI revealed that FDI inflows in the manufacturing sector dropped from $9.6 billion (2014-15) to $8.4 billion in 2015-16. The proportion of FDI in manufacturing against the total FDI received plunged to a mere 23.39 per cent, the lowest ever in the last 5 years.

The fact is that in the manufacturing sector, automation is steadily moving into a higher gear. Technological advancement is good and much-needed too but an increase in industrial robots,with mechanical arms, would mean lesser jobs for workers. This may result in the manufacturing sector contracting the number of vacancies it can offer people, in comparison to what it currently does.

The Boston Consulting Group has projected that growth of advanced robotics will accelerate from around 2 to 3 per cent annually to around 10 percent annually during the next decade. It has also claimed that more than 40 per cent of manufacturing tasks will be done by robots in some industries in the years to come.

India is home to some of the best talents in the world, but still a major part of this pool remains untouched due to a fragmented marketplace. Most of the tier 2 cities have little or no job generation leading to hubs being creating in most of the major cities in the country. This is also resulting in a stark contrast in the standards of living.

There is also a major inequality in terms of the income thereby increasing the rich-poor divide. And till the time, the rise in economic inequality remains untapped, it is unlikely how India as a whole is going to make a progress.

Job creation is a must in India for only that can provide a continuous push towards a growth in the country’s GDP. What is needed are not short-term reforms but a planned strategy keeping in mind the medium and long-term targets.