The trailer for Welcome to New York has been released. The movie, which boasts of being ‘India’s 1st comedy in 3D’, is a multi-starrer. At the centre of the movie seems to be a big Bollywood award show that is hosted in New York.

The trailer introduces the film’s leads — Sonakshi Sinha as Jeenal Patel and Diljit Dosanjh as Hero — who are overshadowed by the string of stars that parade throughout the trailer.

Also Read: Who all won at the Filmfare Awards 2018

More than Sonakshi Sinha’s forced peppiness as a fashion designer, Diljit Dosanjh’s cool Punjabi (read: Funjabi) presence as a recovery agent sort of helps you glide through the two-and-a-half minute trailer. The trailer is packed with stars and with every new celebrity who saunters onscreen, one is distracted from the trailer’s inability to evoke genuine laughter.

Riteish Deshmukh as the “abla” (helpless) man trying to become a bigshot, seemingly gay filmmaker (Karan Johar) to sign him for a film is a typical portrayal of gay men being lecherous at every other man.

Johar has a double role — one is the filmmaker and the other is “the Bollywood villain”. Johar tries to roast himself by punishing someone for watching Kuch Kuch Hota Hai and an ambiguous mention of his acting in Bombay Velvet is made elsewhere. 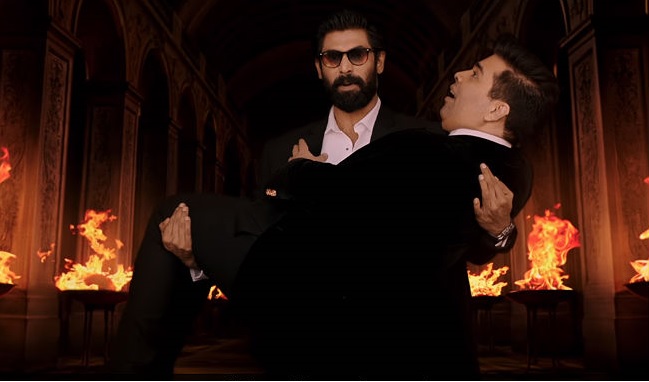 But what happens when Boman Irani, Lara Dutta, Sushant Singh Rajput and Rana Daggubati are in the same trailer? There are predictable jokes about Baahubali and MS Dhoni. Dosanjh mixes up Rajput with Dhoni and Daggubati says “Jai Mahishmati”. *cue laughter* Well, not so much.

Even though you try to fight it, this trailer sends a Housefull-meets-Kya Kool Hai Hum shudder down your spine. The film is directed by Chakri Toleti and is going to hit theatres on February 23.

Don’t agree with us? See for yourself.