Nimrat Kaur-starrer The Test Case has earned immense accolades since the first episode was aired on Ekta Kapoor-owned ALT Balaji channel. Directed by Nagesh Kukunoor, the web series is centred on the debate revolving around the induction of women in combat roles.

Right from Day 1, Captain Shikha Sharma (Nimrat) has to battle stereotypes which are obviously sexist in nature. She manages to break the ice with all her peers except one, Captain Rohan Rathore. Son of a general in the army, Rathore does not welcome the new entrant whom he addresses as ‘Military Barbie’.  Rathore whose real name is Bhuvan Arora, has a different opinion about having women in combat roles.

“Why not? They should be inducted in the combat roles,” Arora, told InUth in a telephonic interview. The first episode witnessed an exchange of words between his character and Shikha Sharma. Although, the actor refused to divulge further into what transpires in upcoming episodes, he spilled the beans on how difficult it was to be ‘mean’ to her on-screen.

“I share a great friendship with Nimrat off the screen. So, whenever we were required to quarrel before the camera, it was actually difficult,” the actor, who has worked in films like Shuddh Desi Romance and recently in Naam Shabana, added further. 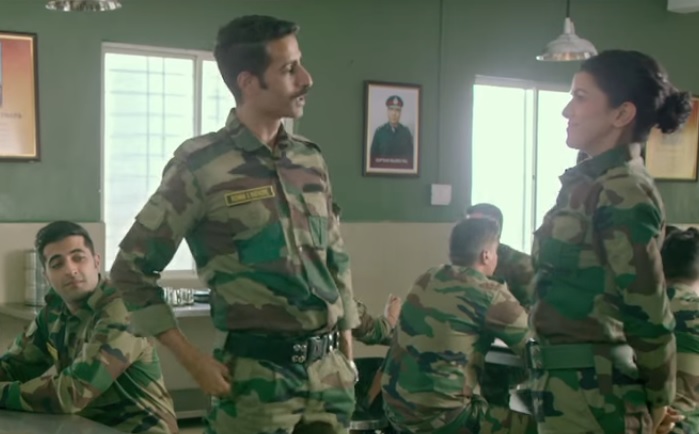 Bhuvan Arora and Nimrat Kaur in a still from The Test Case. (Courtesy: YouTube/ALTBalaji)

TTC is helmed by Nagesh Kukunoor, who has won two National Awards for Iqbal and Dhanak. Arora terms the experience of working with him as a fruitful one. “It has been a great experience working with Nagesh Sir. He is very relaxed and precise about how a scene should be enacted. He knows how to extract the best out of the actors.”

However, the actors had to undergo intense physical training before the shooting started. Well, we can clearly witness it in the first episode itself when the cadets are asked to do 100 push ups as soon as they arrive at the academy. When asked whether his on-screen supervisors Rahul Dev (Kripal Bhatti) and Atul Kulkarni (Commandant Ajinkya Sathe) were as ruthless off-screen, Arora disagreed. “Both the actors are senior to me and they are quite relaxed,” he added.

Having worked extensively in films and television, Arora says the future lies in digital entertainment as more and more people are consuming content via platforms like Netflix, Hotstar etc.

“No offence to TV, but nowadays more and more young people are catering to content on the digital platform. In years to come, you can say that digital entertainment might be a major source of entertainment,” says Arora. He will be seen in upcoming film Bank Chor wherein he shares screen space with Riteish Deshmukh and Vikram Thapa. As Arora describes it,” the film is about 3 morons who try to rob a bank on a day when everything goes wrong.”

As the excitement for the second episode for The Test Case, all we can do is expect cordial terms between Captain Rohan and Captain Shikha Sharma.

For more interesting entertainment and lifestyle videos from InUth, follow us on Youtube.com/InUthdotcom