Vivek Agnihotri is a many of few comprehensible words. He recently appeared on a Newslaundry interview, where he said something to the tune of ‘you have your facts, I have mine’ – after which there were rumours of job offers from Donald Trump. And right when you think he couldn’t stoop any lower (something that seems to be true for most blind advocates), he managed to be insensitive to a Kerala-based nun alleging rape by a Bishop and trivialise the #MeToo movement, with one stone.

And, wait for it… he then used it to mock Swara Bhasker – someone who has been vocal about issues like the Kathua rape case and Agnihotri’s #UrbanNaxal – by asking her why she wasn’t holding a placard with #MeTooProstituteNun written on it! 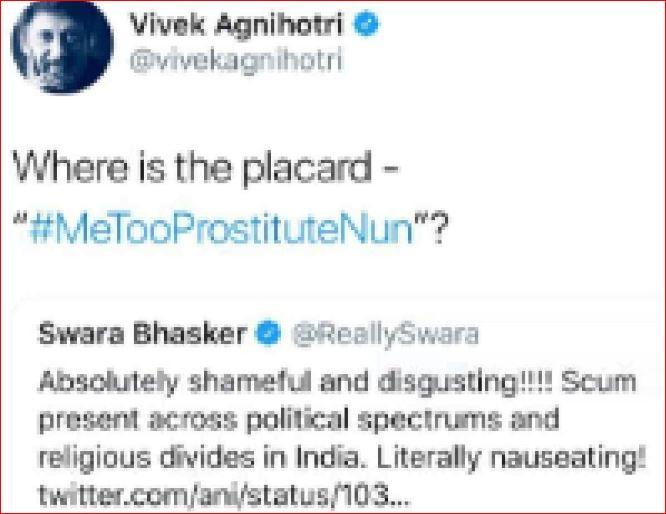 Bhasker first gave a dignified response to Agnihotri, by asking him to implore on what he had just tweeted. And she then went on to report an unrepentant Agnihotri, accusing him of bullying and abuse of women in public.

Vivek. Just want to point out that you are using the trauma of women who are rape survivors to slut shame and abuse in public a woman you don’t like. In the rare moments of sanity that may visit your brain – otherwise unhinged with hate- think about how low that is. #scum https://t.co/yOpo8nxWqS

Thank you @TwitterIndia @TwitterSupport 4 taking cognisance of @vivekagnihotri ‘s abusive tweet. And making him delete it! No tolerance 4 cyber bullying & abuse of women on public platforms! (Or private – but one thing at a time) Thank u #SayNoToBullying pic.twitter.com/psYyVil7EI

Bhasker – someone who has time and again stood up to the henchmen of the right wing – signed off by asking everyone to stand up to the bullies. Even if they were large in number.

Girls! (& boys & everyone) DO NOT allow cyber bullies & haters to shame you or humiliate you on public platforms!! Resist, challenge and call out bullies & misogynists! Thank you @TwitterIndia @Twitter @TwitterSupport You just made the virtual public sphere a little bit better 🙂 pic.twitter.com/MmhOkofq4C

This case involving Vivek Agnihotri is proof that some people who say nonsense under the pretext of ‘expressing themselves’ can be taught manners and sensitivity as well. It’s never too late.