Taking a dig at Uttar Pradesh chief minister Yogi Adityanath for his rather off-the-cuff remarks on ‘women’s protection’, author-columnist Twinkle Khanna on Friday suggested that he needed to do a yoga ‘asana’ which eases “releasing gas”. At a recent event in New Delhi, Twinkle — popular in the social media world as Mrs Funnybones — was at her wittiest best while fielding questions on her life as a writer, mother, wife and her views on feminism, politicians and motherhood.

At the the India Today Woman Summit and Awards when she was asked what she would have to say to Adityanath, who according to session hostess Koel Purie “doesn’t have an amazing track record for his statements on women”, Twinkle quipped: “He needs to do an asana… which helps release gas. But I think he’s also changing fashion. In fact, I had tweeted as well that Asian Paints must announce the new colour of the season — Beguiling Saffron with a tagline: Orange is the new brown.”

Women empowerment and feminism is a subject close to the heart of the actor-turned-writer, whose latest column explored sexual harassment at work. 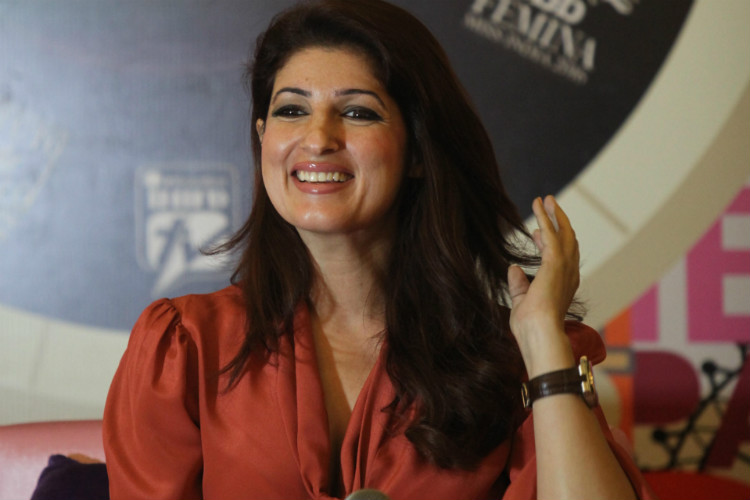 Of late, Bollywood’s leading ladies like Alia Bhatt, Sonakshi Sinha and Deepika Padukone, have been flaunting T-shirts with feminist slogans. But there’s a need to go beyond that, says Twinkle, who believes in the event presenter Vivel’s ‘Ab Samjhauta Nahin’ tagline.

“As long as you believe in equality, you’re a feminist. Having said that, these days I see a lot of proverbial T-shirt wearing feminists, and that’s fantastic.

“There’s one (T-shirt) by Dior that I really want… But with me, I feel like I need to go a bit beyond that.”

What is she doing on that front?

“I think for me, my version of feminism is based on me pushing the envelope by picking stories I tell and projects I plan. So I am making a movie called Pad Man. It revolves around menstruation and sanitary pads.

“I’ve put my money, my clout, my goodwill and determination behind a project which I believe will alleviate the burden from a lot of women, and will take a part of our biology that is right now wrapped in newspaper and shoved down black plastic bags and bring it out for open discussion.

“That’s my version of feminist.”

Pad Man is Twinkle’s debut film production and it features Akshay Kumar. It is based on a real life story of Arunachalam Muruganantham, who devised a cheaper way to make sanitary pads for women in his village and also sells the machine which makes low-cost pads to NGOs to work towards women’s hygiene.

Also read: Akshay Kumar and Twinkle Khanna clock 16 years of marriage but have been trying to ‘kill each other’ since

Twinkle says she chased Muruganantham for eight months, and when they spoke, she found an instant connect with his one-liners and how he doesn’t take himself very seriously. He once told her: “You look like the actress… Raveena Tandon.”

“I was about to drop his story,” Twinkle quipped, adding another joke when she narrated how she was recently handed over a bag at home, and told that it had her Pampers.