Karan Johar’s Koffee With Karan always grabs eyeballs for being a star-oriented platform, controversial, and entertaining. With the type of format it enjoys, KWK is one of its kind chat show on television. Since its first season, which was aired in 2004, the glamorous talk show has been making noise. For some reason, most of the time this noise has turned ugly (say Deepika Padukone’s infamous condom taunt on ex-beau Ranbir Kapoor).

The show has just entered its fifth season with the opening episode being graced by Dear Zindagi star — Shah Rukh Khan and Alia Bhatt. The next celebrity guests on the show after Parineeti Chopra and Aditya Roy Kapur are going to be Sania Mirza and Farah Khan. The two women took to Twitter to express their excitement over being a part of the show, which is aired on Star World and Star World HD.

Sania also posted an image from the set in which she is seen wearing a red gown, while Farah is seen in a green gown. Sania posted: “Koffee anyone? Debut on Koffee with Karan.”

As the show sets on a new journey with a new season, we bring you an interesting flashback of the most controversial statements on Koffee With Karan. Check out the list:

In season 2 of the show, Kareena Kapoor was asked to say whatever comes across her mind when somebody takes John Abraham’s name in front of her. And Bebo replied — expressionless. This raised a few eyebrows as the rivalry between Kareena and Bipasha was at its peak and the Bong bombshell was dating John then. Later, when the same question was asked to Bipasha, she snapped at her back, saying  ‘she has a lot of expressions.’

2. Where does she get her accent from?: Kareena Kapoor on Priyanka Chopra (refer to the above video)

Kareena always made some controversial statements whenever she sat on the KWK couch. However this one, for Priyanka Chopra, called for much uproar.  Karan asked Bebo that if she were to interview Ms Chopra, what would she like to ask her. To which Kareena was prompt to answer that she would like to ask her ‘from where did she get her accent?’

3. I am a virgin and I sleep alone: Salman Khan

Salman Khan graced the opening episode Koffee With Karan season 4 and made eye rolled at many revelations he made on the show. One such revelation that he made was the fact that he was virgin. Of course, the statement called for a debate among bhai fans later.

The actress had broke up with Ranbir before she made an appearance on Koffee With Karan. During a series of questions put in front of her and her partner on the show — Sonam Kapoor, Deepika made that ‘condom’ statement about the Kapoor scion.

5. From the same place where Saif (Ali Khan) got his accent: Priyanka Chopra on Kareena Kapoor’s comment

Later, reverting to Kareena’s comment as mentioned in point 2, Priyanka made sure to give it back to her and said ‘from the same place where Saif got his.’

Tusshar Kapoor usually stays away from controversies and is quite a media shy person in real life. However, the actor hit the ball in his court very high when Karan asked him — who’s synonymous with botox in Bollywood. And he instantly took Preity’s name.

Abhay Deol had a bitter experience working with Anil Kapoor’s daughters Sonam Kapoor and Rhea Kapoor in Aisha. He had even alleged that the makers of the film kept him away from the promotions which irked him a bit. In the same context, Anil made a comment on Mr Deol, saying that ‘he needs help in every way.’

8. If you’re not good looking, they think you’re a good actor: Sonam Kapoor

Sonam Kapoor arrived with daddy Anil Kapoor on season 4 of the show. Karan asked her how does she react to the criticism that she hasn’t yet been able to establish herself as a good actor in the industry. Sonam, quite gracefully answered the question and said: “If you’re not good looking, they think you are a good actor. Just because you look ordinary and you talk loud doesn’t mean you’re a good actress.” 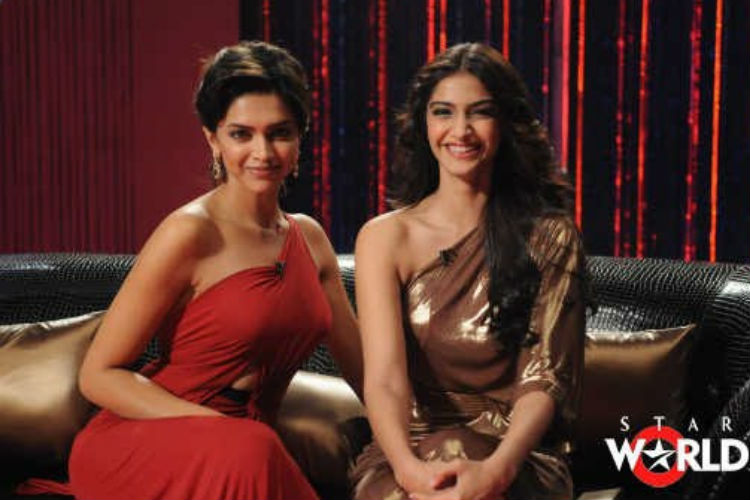 It was rumoured that Katrina Kaif had flied down to LA to visit Ranbir Kapoor on the sets of his then upcoming film — Anjaana Anjaani. And in the same context, Deepika told Karan that she would like to ask Katrina’s permission to check her passport. Karan had however asked her to pick an advice to give to Katrina. She went with a question instead.

While things from both the ends are the cordial now, there was a time when KWK cashed-in TRPs due to SRK’s comment on rival Salman Khan in one of the episodes. Shah Rukh while talking about what led to the bitterness in his relationship with Salman, said: “If Salman Khan is angry with me, it is 100% my fault.”