Why is it so difficult for us to celebrate a genuine piece of good news?  Aamir Khan starring in the cinematic adaptation of the Hindu epic Mahabharata is real good news at a time when elected representative of a party asks people to make a choice between two films based on the religion of the actors starring in them. (Remember Kailash Vijayvargiya Raes vs Kaabil campaign). Add to it the fact that Aamir is a great actor and his films perform exceptionally well at the Box Office.

There is no word of confirmation from the actor’s camp on the project, though.

But some right-wing trolls are mighty angry that an actor with the surname ‘Khan’ is playing a ‘Hindu’ character in the mega-budget film, reportedly being produced by Mukesh Ambani. Take a look at this tweet by French journalist Francois Gautier  –  a Hindutva activist. 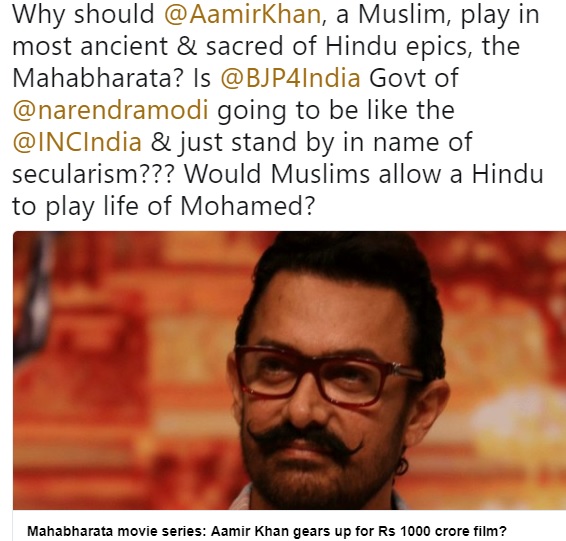 This is the same person who had claimed that Prime Minister Narendra Modi’s rise to power was predicted by 16th Century French seer Nostradamus.

I will insist that you read his post titled, “India and Nostradamus” just for a good laugh.

Prominent personalities took on the tweet and pulled up Gautier for attacking Khan.

Javed Akhtar had a full blown argument on Twitter with Gautier’s followers. He said: “It is beyond your limited single digit IQ that there many people in India who have no religious beliefs but still have a reverence for Indian Mythology.”

But Gautier’s tweet  turned out to be quite popular among his followers who seemed to agree with him. Many said, an actor must have some “spiritual connection” with the role they are playing. Others were a little more sparing and accommodating. They said they would be okay with Khan playing Duryodhana – the evil brother of the righteous Pandava, but wouldn’t like it if he played Krishna or the “pious” Arjuna.

Hmm…you know what people, Chitragupta is keeping a tab on your lekha jokha. So, beware!