Picture this. Disha Patani is a distraught mother asking her stumped neighbours if they have seen her recently-kidnapped daughter. “Kya apne meri beti ko dekha hai?” she asks a portly man with a phone glued to his face. Her face is as earnest as a kindergartener reciting “Twinkle, Twinkle little star”. This is a big scene. This is the more difficult of the two stock expressions Ms Patani has displayed in her acting career – it requires for her perfectly-shaped eyebrows to furrow a bit. You can see droplets of sweat accumulate around her temple. The screen pulsates with the throbbing of her heart. 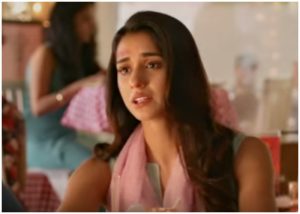 The man, who is supposed to say a gruff “no!”, stares at her with the same feeling of dread and expectation that a parent opens his/her child’s report card. The air is thick with expectation. Patani manages to pull off the half distressed half is-my-lipstick-okay look for the whole of 2 seconds. I am sure asli chia laddoos were distributed on the sets of Baaghi 2 that day.

ALSO READ: Tiger Shroff Narrating The ‘Struggle’ He Faced By Getting A Haircut For ‘Baaghi 2’ Has Everyone Going WTF

Not that anyone will watch this film expecting any form of histrionics. If you are a masochist, and are looking for a franchise that trumps when it comes to creative ineptitude and shameless exploitation of this country’s obsession with nationalism, you have hit the jackpot.

Within the first few seconds of the film, director Ahmed Khan makes his intention clear. He will play every dirty game in the book to supply his audience with a cheap shot of hyper-nationalism. The films opens with an altercation between army jawan Ranveer Pratap Singh or Ronnie (Tiger Shroff) and a separatist, who is then made a human shield as he drives past a crowd of raging Kashmiris. When he is pulled up for his actions, a stony-faced Tiger mumbles something about desh bhakti. The audience is suitably teary-eyed.

How is the view from the bottom of the toxic barrel of jingoism, Mr Khan?

Talking about the pits, Tiger Shroff is a revelation here. There are moments in those doing-double-flip-in-the-air-while-punching-five-men-and-strangulating-two-more scenes where he almost perfects Hrithik Roshan’s Main Prem Ki Deewani Hoon-expressions. As the animated parrot from the film will tell you, it’s no mean achievement.

And before you ask me, let me tell you that Manoj Bajpai’s role in the film is another example of what happens when talent gets distracted – not by art, but by a mirage they see in the form of a large paycheck.

Baaghi 2 has a plot leaner than Tiger Shroff’s diet. It’s also has protein supplements in the form of a pumped-up Prateik Babbar and a beefy Randeep Hooda. They mouth their cheesy dialogues with zero conviction and the “this-is-all-I-do-now” look in their eyes. As impediments in Ronnie’s quest for his ex-lover’s kidnapped daughter, they are just about convincing. And in an enterprise as poorly-acted as this, that amounts to high praise.

But the top honours still goes to Disha Patani for managing to register a flicker of an expression for a nanosecond. Jaqueline Ferandez’s abs come a close second.