Ajay Devgn will be seen in Milan Luthria’s Baadshaho, which is set against the backdrop of 1975 Emergency. The story revolves around six people who plan to rob a truck containing gold. The teaser of the film also starring Emraan Hashmi, Esha Gupta, Ileana D’Cruz, Vidyut Jammwal and Sanjay Mishra has created a lot of buzz. The song Rashk-e-Qamar sung by late Sufi singer Nusrat Fateh Ali Khan that features in the film has turned out to be a chartbuster.

Ajay Devgn is considered one of the finest actors of our times. The two-time National Award winner has earned accolades for his performances in the two-decade long career. His intense eyes and effortless dialogue deliveries have made his characters immortal, be it Company’s Malik or Once Upon A Time In Mumbaai’s Sultan Mirza. Not only critical acclaim, Devgn also has the capability to churn out money-spinners at the Box Office. In an industry dominated by the Khan triumvirate, i.e Aamir Khan, Shah Rukh Khan and Salman Khan since a long time, Akshay Kumar has emerged as a potent challenge to their hegemony. But you cannot rule out Devgn’s image among the cinema-goers. His collaboration with Rohit Shetty has paid rich dividends and the results are in front of all.

Here are 10 highest grossing films of Ajay Devgn that prove why it is foolhardy to write him off due to the advent of newbies like Varun Dhawan and Tiger Shroff in the B-town. The figures have been compiled from Box Office India. 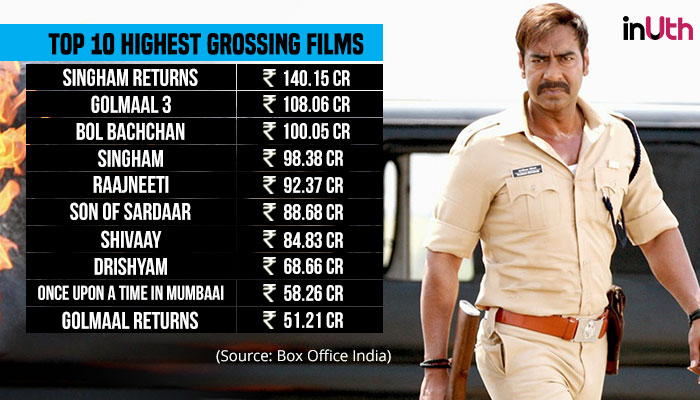 The Number Games
Ajay Devgn boasts of three Rs 100-crore plus films in his kitty, namely Singham Returns, Golmaal 3 and Bol Bachchan. These three films have been helmed by Rohit Shetty, who is known for his expertise in masala ventures. But if you think that the 48-year-old actor can only churn out masala blockbusters, think again. Shivaay and Drishyam, that were different from each other, did decently well and cannot be termed as a failure. Especially Shivaay, that got Devgn pitted against Karan Johar due to screen allotment issues, earned more than Rs 84 crore.

The reason is evident. Ajay Devgn is as popular as Akshay Kumar among the masses. During my trip to Goa in 2011 that marked the year of Singham’s release, guides were seen showing their clients the spots where Ajay Devgn pulled off action stunts as tough cop Bajirao Singham. If an actor can have such an influence on the masses with just one film, then it is really unfair as to why his films do not end up being blockbusters too often?

For instance, he played the role of a smuggler inspired by Haji Mastan in Once Upon A Time in Mumbaai. The dialogues of the film have acquired a cult status over the period of time. Made at a modest budget of Rs 35 crore, the Milan Luthria directorial also featuring Emraan Hashmi, Kangana Ranaut, Prachi Desai and Randeep Hooda earned Rs 58 crore.

Similarly, Ajay Devgn pulled off a brilliant act in Drishyam that turned out to be an average grosser. He was a solely responsible for the suspense thriller making moolah at the Box Office. All he needs is a bit more appreciation in terms of collections.