An aspiring Telugu actress on Saturday resorted to a semi-nude protest outside the Film Chamber of Commerce in Hyderabad.

Sri Reddy, who held the protest against the existence of casting couch in the Tollywood industry, was detained after she took off her shirt. She alleged that she has been sexually exploited by many producers and directors in the past.

“They see the videos and give no roles. They have even asked for live nude videos from me. That is the extent to which they go to take advantage of women who seek roles,” Times of India quoted the young actress as saying.

The young actress also had a gripe against the Movie Artistes Association (MAA) since the organisation did not grant her membership despite her record of having acted in three films. 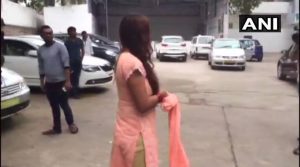 She also claimed that most of the roles are given to “imported” actresses from Mumbai and elsewhere while local talent is pushed into the vicious circle of sexual exploitation.

Ahead of her protest, Sri Reddy took to Facebook onto express her desire to meet chief minister K Chandrasekahr Rao to discuss about the trend in the Tollywood. She threatened to go nude in public, if the chief minister did not bother to give her audience, Hindustan Times reported.

She came to the film chamber in a salwar kameez and and started stripping down to her under garments in front of the public. However, the police intervened after she took off her shirt and detained her.

Reddy today took Twitter alleging that she is being victimised for raising her voice .

My owner called me and told to vacate my house,what a great people..he is working as an IAS ..such a narrow-minded people..U dnt even imagine how rude talking..Big people game started..starts playing politics on me __#srireddy

The actress also said in another post that she does not expect any film offers after the protest and urged people not to body-shame her.

In a Facebook post on Monday, she suggested that a top director of Telugu films used to ‘roam around’ near her house and used to harass several women and ask for video calls.

Soon, director Sekhar Kammula lashed out at the actress asking her to aplogise or be ready for legal action.

“Yesterday, a social media post maligning me came to my notice. It is vulgar, demeaning and full of lies. It has caused deep grief to my family, to me and many more who value me,” Kammula wrote on Twitter on Tuesday.