Telugu fans of Tamil actor Ilayathalapathy Vijay have a reason to rejoice as the Telugu dubbed version of actor’s upcoming Tamil release Mersal got its title. The film, an action entertainer which marks the collaboration of Vijay and director Atlee after the 2016 blockbuster Theri has been produced by Thenandal Films. The film is also the 100th film of the reported Tamil production studio. Atlee took to his Twitter page to reveal the title of the film as Adirindi. The Raja Rani director also shared the first look poster of the film as well.

Similar to its original title Mersal, the Telugu title and the first look of the film has gone viral within one hour across the social media. And without any surprise, the dedicated Ilayathalapathy fans wasted no time to trend the film at numero-uno on Twitter. The first look poster of Adirindi features the Thuppakki actor in a mass avatar and his look is sure to be a trend among the Ilayathalapathy fans.

Adirindi features three female leads- Nithya Menen, Kajal Aggarwal, and Samantha. While the film marks Nithya’s first collaboration with Vijay, for Kajal and Samantha, the film will be their third outing with Vijay after Thuppakki and Jilla (Kajal), and Kaththi and Theri (Samantha). Interestingly, all four films were blockbusters at the Box Office.

Check out the poster: 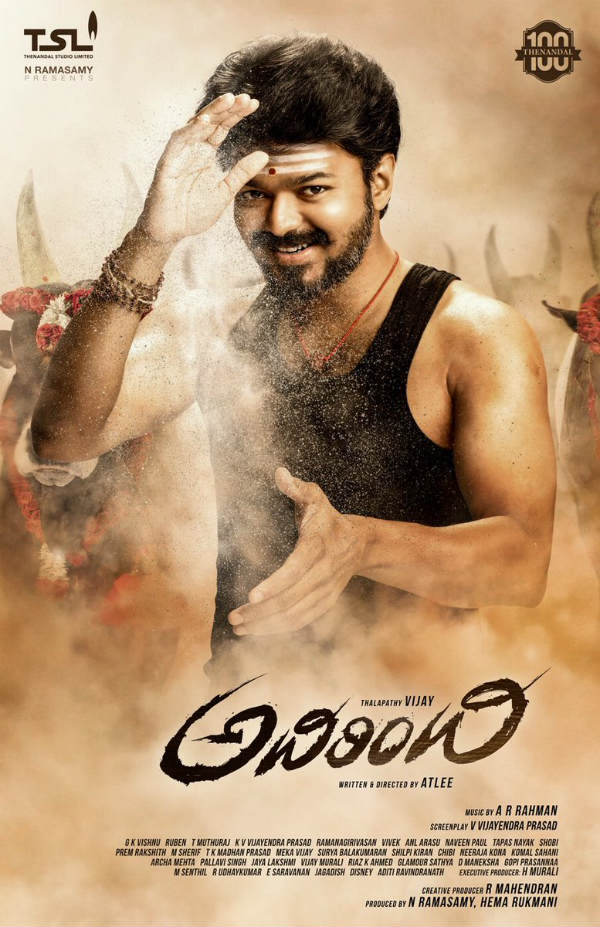 The film was in news ever since the technician’s names were announced. The music of the film has been composed by Oscar-winning maestro AR Rahman. Another factor to look out for Adirindi will be the story by the renowned writer, K. Vijayendra Prasad. The previous movies penned by Prasad, Baahubali and Bajrangi Bhaijaan turned out to be all-time Indian blockbusters and the makers of the Vijay starrer will be hoping to recreate the same success from the veteran writer.

Both the Tamil and Telugu versions of the film are expected to release on the auspicious occasion of Diwali.