With the grand premiere of Salman Khan’s Bigg Boss 11 on Sunday, October 1, the wait to witness the contestants battle it out inside the house is finally over. Besides popular celebrities including Hina Khan, Shilpa Shinde, Hiten Tejwani and Priyank Sharma, it was model Arshi Khan who grabbed our attention. She entered the show with another commoner, Bandgi Kalra and promised lots of masala for the audience. In fact, while introducing her, Colors TV’s tweeted: “Aa gayi hai Arshi Khan, #BiggBoss11 ke ghar mein aag lagane! RT if you totally love this bold woman!”

As soon as she entered the big house, Colors TV in a tweet confirmed that she had an argument with co-contestant Puneesh Sharma, a businessman from Delhi. Arshi called him ‘Ayyash’ and told him that he doesn’t understand Urdu.

While it’s already evident that the model is fully prepared to bring the Bigg Boss house down with some controversies, but looks like the lady has the same fearless personality outside the house as well. In the past, Arshi kickstarted a controversy when she once claimed that she was in love with Pakistani cricketer Shahid Afridi. In fact, when the news broke in, she kept denying it initially until talking about it through Twitter. Refuting the rumours, she had said:

I have lots of friends and relatives in Dubai and travel to Dubai very often. A lot of Pakistani cricketers are seen visiting, shopping and partying in Dubai and regular visitors to Dubai meet them often. This does not mean I am dating Afridi.

Here’s how she kept tweeting about it: 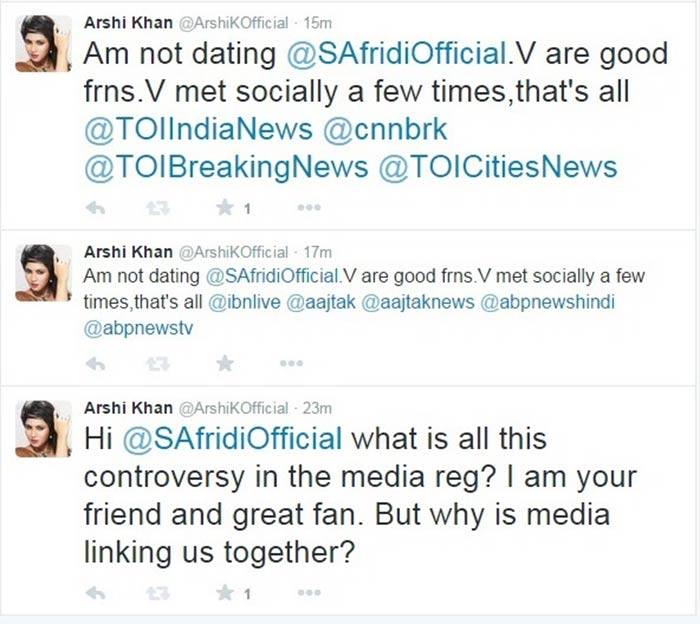 However, later she shocked everyone by confessing that she had a sexual relationship with Afridi. Reportedly, she took to Twitter and wrote:

Also Read: Bigg Boss 11: Meet Rocky Jaiswal, the special somebody who got a goodbye hug from Hina Khan

Here’s the tweet that further fueled the controversy: (we don’t know if it was her official account or not)

Now, check out some Instagram photos of Arshi Khan here:

Do you think Arshi will make Season 11 more entertaining?