The greatest feud of the decade is finally over. Days after an in-flight scuffle led to the fallout between two popular comedians has actually come to an end. Yes, we are talking about Kapil Sharma and Sunil Grover who have patched up in a party which left several people teary-eyed with their bharat milaap.

The news will sound pleasant to the ears of not only the fans of both the comedians, but also the channel which was at the receiving end of their feud. On the other end, media fraternity is in shock with this reconciliation. Several news websites have held emergency meetings to discuss their strategies as the reunion has deprived them of web traffic. Some armchair critics who claim themselves to be experts in comedy by binge-watching comedy sitcoms from the West, have already penned an op-ed calling the entire fight between Sunil Grover and Kapil Sharma a farce. But wouldn’t you be interested in how the second biggest fight after Shah Rukh Khan-Salman Khan tussle ended on a happy note?

According to sources, the party was meticulously planned with the reunion in mind. Some say the Narendra Modi government had personally intervened in the matter as the PM was reportedly upset over being mentioned zillion times by Kapil Sharma over the tweet episode. At least Grover’s return will help Sharma to crack some fresh jokes. It is said that former Congress MLA Baba Siddique, who is credited to be behind Salman and SRK’s patch-up was requested to do it once again for the service of the nation. “I had never seen such a crowd outside my house even during my stint as an MLA,” Siddique told InUth.

The party took place at a plush bungalow in Versova. It could have been held at some other place in Mumbai but the organisers wanted to massage some of Grover’s ego as the house happens to be close to Sharma’s bungalow which has landed him in legal trouble.

While Sharma was present quite early at the party, Grover was late by 20 minutes. The former, who is finding it hard to contain the depleting TRPs of his The Kapil Sharma Show, was seen discussing with other guests on how to fill the void created by the absence of Grover. A guest on condition of anonymity told us,”What irked me was the manner in which Kapil brought up his forthcoming film Firangi at least 10 times in the conversation. That’s when we realised the two should be united.”

While Sharma was cracking same old repetitve jokes, a sudden round of applause drew his attention. Like on TKSS, Grover was witnessed with thunderous applause and cheers by the guests. They looked at each other and the banquet hall was silenced. 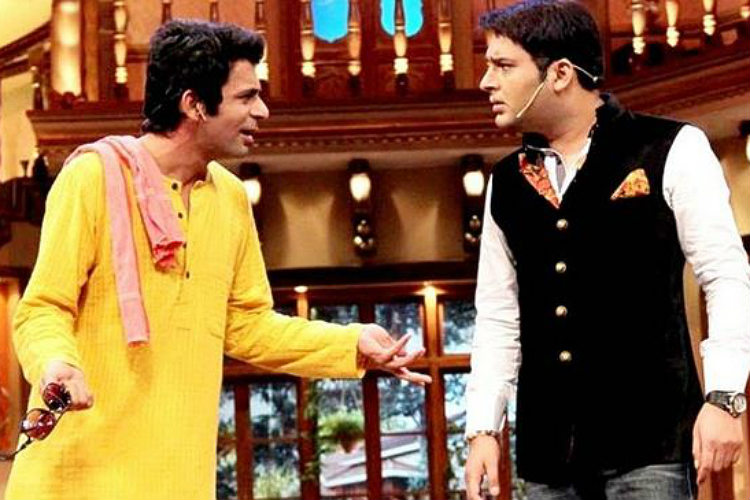 The reaction when Kapil Sharma and Sunil Grover bumped into each other at the party.

And then, both hugged each other. The crowd was in a state of shock. A guest present there fell into the swimming pool in disbelief. They wiped each other’s tears and recalled the good old days. Kapil apologised to Grover for the misbehaviour and urged him to return to the show. The latter agreed and it is reported that both of them left the venue later.”After a long time, Kapil Sharma received a thunderous applause at a venue, that too because of Sunil Grover,” recalled a guest who was present in the party.

All well that ends well. But wait, there’s something which we are gonna say that will leave you in a state of disbelief.

We do want both the comedians to patch up soon and continue to entertain us with their chemistry. We hope you will take this prank in good spirit.