People love Ed Sheeran but they might not after this. The 26-year-old singer, who was due a cameo on Game of Thrones season 7, left a spoiler for all his fans to see on his Instagram. Game of Thrones fans hate it when someone spoils a new episode for them but with the season 7 premiere, Sheeran was all like- IDGAF.

The latest episode of Game of Thrones titled “Dragonstone” aired just last night and since not everyone would have found the time to watch it as soon as it came out, the internet was not a safe place for them. But, what do you do when your favourite singer pushes out a new photograph on Instagram? You must check it out, right? But, it turned out to be a Game of Thrones spoiler. An unsolicited, sans warning, massive spoiler. 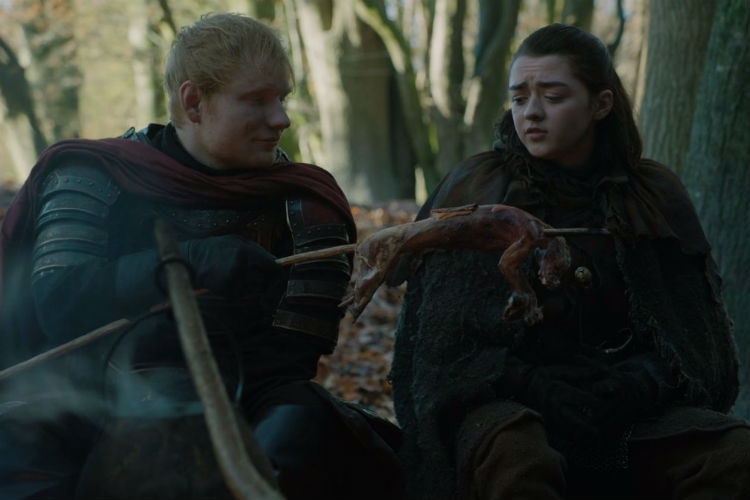 Ed Sheeran had a brief scene with Maisie Williams, who plays Arya Stark, on Game of Thrones.

It was already known that Ed Sheeran would appear on Game of Thrones in a brief scene where he would sing to Arya Stark. This was to be a little gift from the show makers to Maisie Williams, who plays the role of Arya and happens to be a huge fan of the singer.

Like a true savage, on the day of the Game of Thrones season 7 premiere, Ed Sheeran posted a screenshot of his character from the episode with the caption: “Throwback to the time I was a Lannister.”

Throwback to the time I was a Lannister

Actually, no. he’s not a Lannister, per se. Ed’s character was a soldier of the Lannister army that Arya encounters while riding through the Riverlands. Maybe he needs to brush up on his Westerosi trivia. But, all’s forgiven with that beautiful voice of his.

For those who managed to catch the show quicker than others, the Game of Thrones season 7 premiere was an absolute delight thanks to Ed Sheeran’s cameo.

what an unexpected cameo by Ed Sheeran but damn his voice is so good! And Arya Stark woohoo. #GoTS7 #GameOfThrones pic.twitter.com/7tXmjLOOsk

Loving me some @edsheeran on @GameOfThrones I know it’s wrong to hold out hope that he’ll live but I really do hope he will. #GameOfThrones

I honestly screamed “OMG ED SHEERAN IS IN GAME OF THRONES” earlier when I watched it. #GameofThrones

Omg that was Ed Sheeran, I swore it was just an average woodsy minstrel

about lost my shit!!!! Love GoT and BAM ED!!! #WinterIsHere #GoT

I heard that angel voice and I was like yes ed is in this episode!