The Kapil Sharma Show has been going through a rough patch since the differences erupted between the host Kapil Sharma and his colleagues, mainly Sunil Grover. Television ratings have plummeted and worse than this, the show’s shoot was recently cancelled 10 minutes after it began.

When it comes to promoting their upcoming movies, our Bollywood stars prefer TKSS as an ideal platform to do so. Be it Amitabh Bachchan, Shah Rukh Khan, Salman Khan or Kangana Ranaut, we have seen them laugh out loud over the antics by Kapil Sharma and his team. However, there have been celebrities who have never shared the stage with the celebrity comedian either on TKSS or CNWK.

Here are five Bollywood stalwarts who are yet to be seen on Kapil Sharma’s popular show.

Aamir Khan: Salman Khan has attended Kapil Sharma’s show to promote Sultan as well as Jai Ho. Shah Rukh Khan has done it for all his films which released since 2013. However, Aamir who is the third member of the Khan triumvirate, has never made it to the show. Well, there is nothing like any grudge which the Dangal actor is harbouring against Kapil as he is rarely seen on television. After all, he promotes films in a unique way and might be too busy to find time for the show. 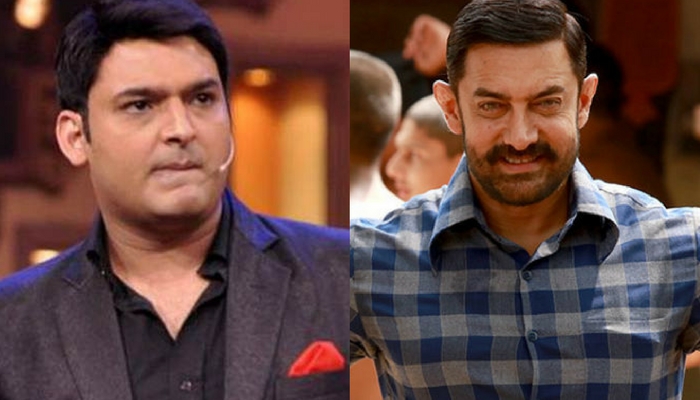 Naseeruddin Shah: He is one of the most versatile actors Bollywood has ever seen.  The 67-year-old actor has acted in comedy films like Jaane Bhi Do Yaaron, and more recently Welcome Back. However, the three-time National Award winning actor has not appeared on The Kapil Sharma Show. Whether he does or not, only time will say. But it would be really nice to see him share a laugh with us on the small screen.

Preity Zinta: Bollywood’s dimpled girl Preity Zinta is known for her charm both on and off-screen. She has a terrific sense of humour and steals the show in various public appearances. Preity recently shared the stage with Kapil Sharma few months ago. It was a brilliant act and had the audience in splits. We hope the duo will set the stage on fire on TKSS as well.

Sanjay Dutt: Sanjay Dutt is known for his comic timing and has shown it in hits like Haseena Maan Jaayegi, Munnabhai MBBS, Lage Raho Munnabhai and others. His sense of humour is terrific and he has appeared as guest on few comedy shows. So, what’s stopping him from gracing Kapil Sharma’s popular stage? It’s high time he entertains us on TKSS as well.

Nana Patekar: The veteran actor left us splits with his role as don Uday Shetty in Anees Bazmi’s Welcome and Welcome Back. Few years ago when comedian Sunil Pal mimicked him at an award show, Patekar was seen laughing out loud as well. Such an actor who takes jokes on him sportingly deserves to be on Kapil’s show. Don’t believe it? Just have a look at this old video.

Also read: Watch: Comedian Sunil Pal has an advice for Sunil Grover and Kapil Sharma to end their cold war