Game of Thrones season 7 might seem like it is aeons away but HBO wouldn’t let its fans hanging. Releasing a brand new set of photos, HBO has proven that the next season is going to be more kickass than the previous ones. This year, fans have had to wait a bit longer than usual as instead of spring, the new season will arrive bang in the middle of summer. But, Game of Thrones has more than made up for it with these new sets of photos unveiled by Entertainment Weekly. 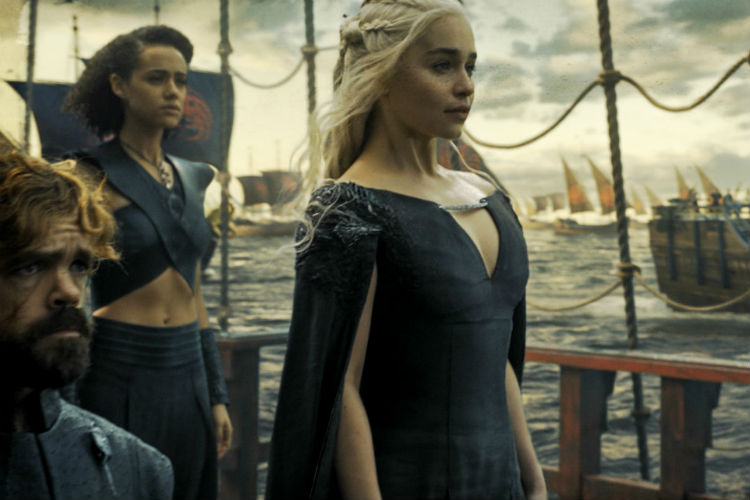 The last season came to a close with a shot of Daenerys Targaryen crossing the Narrow Sea with her army and ships and her dragons screeching across the skies. With all three of Dany’s babies, Drogon, Viserion and Rhaegal now out of captivity, it is understood that the dragons are about to get pretty effin’ humongous but, it looks like Drogon is just about the hitting his growth spurt. While he may not be a match to Balerion- The Black Dread, Drogon is noticeably larger, more imposing and monstrous. Remember when he could just fit in Dany’s lap? Ah! We have come such a long way.

Other photos featuring Jon Snow, Arya Stark, as harmless as they seem, do seem to give us an idea of what the next season might have in store for us. While Jon looks like he might be either leaving or departing from Winterfell, Arya is dressed in warm clothes which means she’s not too far off from her home in the North.

In another photo from the sets, we see Jaime Lannister standing beside his sister/lover/baby-mommy. As much as fans would want the Kingslayer to turn Queenslayer, it really doesn’t seem likely at Jaime’s end. Here are the other latest photos from Game of Thrones season 7:

New picture of Arya from season 7! And she looks like she’s in Winterfell

#WinterIsComing! New photos from @gameofthrones season 7 are here! Swipe through for more and click the link in our bio to see that insane 747-sized dragon (with #DaenerysTargaryen leading the way!). #GameOfThrones: Helen Sloan/HBO