There are two types of serials on Indian television today. The ones that are so bad, they’re the stuff of memes (Hello, Naagin) and those that cater to perversion, gift-wrapped in designer sarees and slapstick humour.

Bhabhi Ji Ghar Par Hain, which has been running successfully since 2015, is touted as a ‘family entertainment’. The show centres around the lives of two neighbourhood couples. Nothing remarkable about that, except the story is about husbands who are more enamoured by their neighbour’s wives. Same trope as Shrimaan Shrimati, but with a whole lot of cringe-worthy innuendo. You could argue that shows or films run on sexism aren’t exactly new and you’d be right. But in this day and age, where women have been fighting to check misogyny, does it then signify that the shows must be allowed to run unchecked?

Set in Kanpur, Uttar Pradesh, BJGPH revolves around Vibhuti Ji (played by Aashif Sheikh) and Manmohan Tiwari (essayed by Rohitash Gaud) who are fed-up of their respective marriages and covet each other’s wives. At the receiving end of their stalker-like behaviour are Anita Bhabhi (Saumya Tandon) and Angoori Bhabhi (Shubhangi Atre, a role previously played by Shilpa Shinde). Neither of the women is ever in on the ‘joke’. Angoori is apparently ‘too simple’ to understand innuendo and while Anita is marginally more clued in, she barely manages to do anything to put an end to this behaviour.

Take this for example: Vibhuti places a hidden camera in a bouquet so that he can ‘watch’ Angoori all day. Did none of the aunties and uncles who watch the show get creeped out by this? 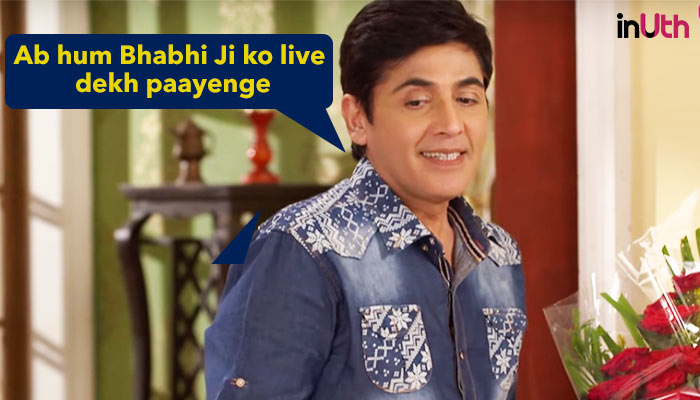 But it’s not just these two who are inappropriate, the other men on the show are no better. The show has Daroga Happu Singh whose sole purpose in life seems to be to flirt with Anita. Malkhaan, another character on the show, flirts with the two bhabhis, repeatedly gets beaten up for it, and then goes back to flirting. And then there is Saxena Ji, whose entire existence on the serial is for the express purpose of saying ‘I Like It’ in a husky voice.

Apart from Angoori and Anita, there are only two other female characters on the show, both of whom are not seen regularly.

So stalking, disregard for consent and innuendo is totally okay for a television audience that may include kids, but a film on patriarchy must not be called ‘Sexy Durga’? Yeah. That totally makes sense.