Actress Swara Bhaskar’s next Bollywood project is Veere Di Wedding with Kareena Kapoor Khan and Sonam Kapoor. But, a few weeks before the film goes on floors, the actress has featured in a web show titled It’s Not That Simple.

The first episode of the web series is already out and has started the conversation about extra marital affair, which is the theme of the show.

Swara, who’s playing the lead character in the series — Meera, however, doesn’t feel good about women or men who look for love outside their marriages. In fact, she says she ‘feels sad’ for people who are in an extra marital affair since she believes that such people are not happy in their marriages.

Also read: Swara Bhaskar is having an extra-marital affair and ‘It’s Not That Simple’

In a conversation with a news agency recently, the Tanu Weds Manu Returns actress talked about It’s Not That Simple, content-based shows and how wide internet’s reach is to provide entertainment. Here’s are a few things she said on:

“At this stage, the audience is ready for everything. This is the best phase where Indian audiences are willing to see something fresh and different. We can still push the envelope a lot more. We are underestimating our audiences. They are really smart.” 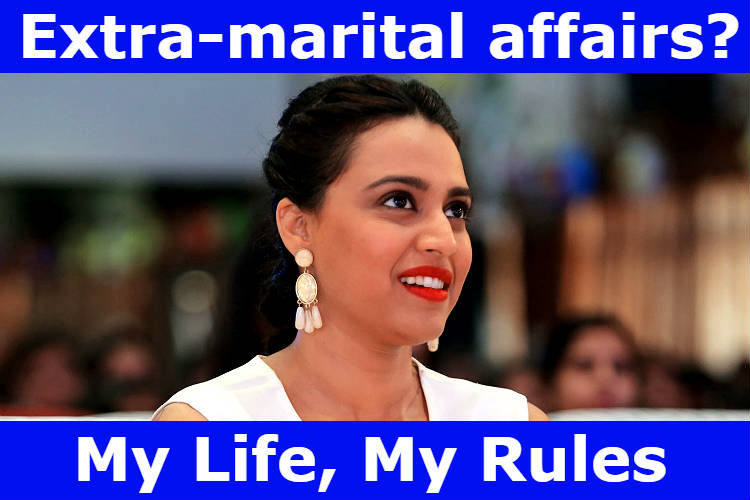 “I think it happens as one is unhappy in a marriage. But I feel sorry and sad for people who are in this situation.”

How different is performing for a web show:

“There’s no box office pressure, no TRP (television rating points) and no censor board pressure as well. There is scope for new work and it’s not that simple either. As an actor, whether you are acting in a film or series, it’s the same”.

“Art and artistes should not be attached with politics.”

How important it is to stand up against hatred:

“Sometimes people are scared. You are more vulnerable to criticism and hate when you are public figures. It’s not very pleasant to wake up in the morning with hate and negativity. Then you think about it… Of course, you will get flak for standing your ground, but you have to ask this to yourself. I am someone who has a varied interest. I care about things outside Bollywood and it bothers me if something wrong happens which I don’t agree with.”

It’s Not That Simple is a six-episode web series, which also features Vivan Bhatena, Akshay Oberoi and Karanveer Mehra. The show revolves around the idea of marriage, relationships, a woman’s stand in a marriage and love.