Sridevi is gearing up for the release of her 300th movie Mom, a character she feels is really close to her heart. The actress, who considers herself not as a veteran one, is in a happy place in life as well. Her daughters Jhanvi and Khushi Kapoor are grown up, and the former is all set to make a Bollywood debut. Though Sridevi doesn’t like talking about her daughter or about the debut, that has been in news for a long time now, she made an exception.

In an interview to film journalist Rajeev Masand, Sridevi spoke about the similarities between her and Jhanvi. The 53-year-old actress started working at the age of four, but her daughter is not following the same path. Sridevi said while she felt secure after seeing her mother on sets, things might be quite opposite with Jhanvi. Laughing at it, Sridevi said maybe Jhanvi would ask her to leave from her movie sets.

When asked what she feels similar traits do Jhanvi and herself share, Sridevi said her daughter is very affectionate. She told Jhanvi has inherited many of her qualities. Sridevi revealed she told Jhanvi to work hard and be able to tackle both success and failure. 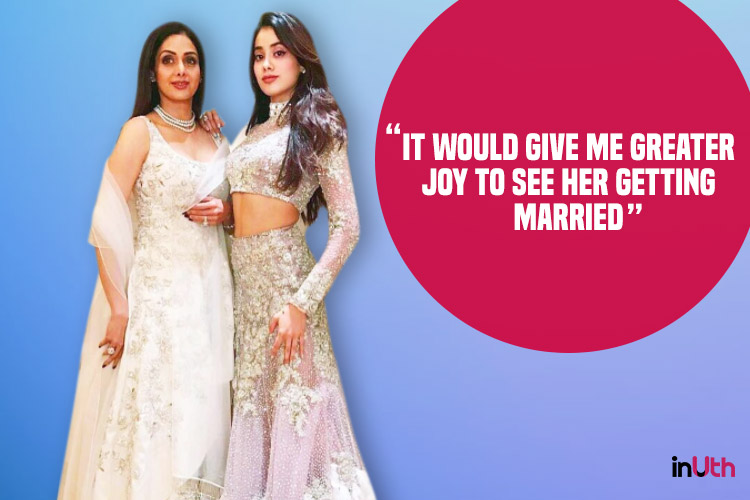 Also read: Are Sara Ali Khan and Jhanvi Kapoor the newest besties of the B-town? These photos suggest so

A few days ago, Sridevi’s statement that she would want her daughters to get married than be actors received a lot of flak. Clarifying on this, Sridevi later took to social media to write, ” I want them to be able to stand on their own feet and have their own identity. I’ve always told them never to be dependent on anyone in any capacity. It’s very important to me that young girls understand that the end goal of their life is not to get married and have babies, they have every right to make something of themselves if they wish to.”