Last year, Sonali Bendre took to social media to announce that she has been diagnosed with an advanced form of cancer. It had already metastasised, but she decided to take charge of her narrative and document her journey. #SwitchOnTheSunshine and #OneDayAtATime became her mantras and after nearly a year, she is still going strong. 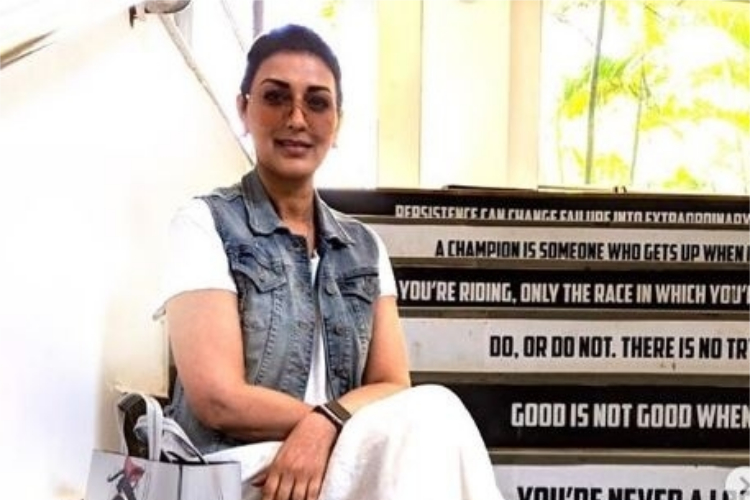 Bendre just embraced her “new normal” by showing up on the cover of one of the glossiest mags in the fashion world – Vogue. With a bald head, barely-there make-up, and a 20-inch scar she got from her surgery, Bendre is uncovering her “new reality”.

The idea was almost preposterous. An almost bald head, barely any make-up and a huge scar was not the norm for @vogue. But, I guess that’s my new normal. Of course I had my reservations, and, if I dare say, insecurities – but a candid conversation with the lovely ladies @priya_tanna and @anaitashroffadajania cleared my doubts. And before I knew it, I was standing in front of the camera, ready to uncover my new reality. The icing on the cake was the fact that I needed one-third of the time for hair and make-up_. So I closed my eyes and jumped into it, full throttle, and this is the result. Thank you, @meghamahindru for telling my story; and thank you @ridburman for understanding my story and saying it so beautifully through your lens. If there’s a piece of advice I can give you all after this, it would be to ‘Find your new normal’. It’s very liberating. Click on the link in the bio to read the full article! #SwitchOnTheSunshine #OneDayAtATime

At the recent India Today Conclave, Bendre opened up about her struggles and biggest takeaway from her battle with cancer, “I kept thinking what did I do wrong. I realised that we have done nothing wrong if we have got this disease. Every cancer is different. The symptoms and treatments are different and every human body deals with it differently. There are no formulas to it. That, I think, was the biggest takeaway for me. I don’t know why people hide it and don’t talk about it. As soon as I put that post out which was basically because I didn’t want rumours or distortion, the response was so overwhelming.”