Sonu Nigam’s Azaan tweet controversy raised many eyebrows. Apart from helping people form opinions, it also left the industry divided on social media. From going ‘bald’ to clarifying what he actually meant on Twitter, the singer everything possible to make others understand that his tweets were not against any religion were against the usage of loudspeakers. Only when everything seemed to be calm down, something again got really messed up. Singer Shaan, another popular playback voice from Hindi cinema randomly decided to took to Twitter to express how he will always refrain from posting anything that encourage hatred among people.

And since Twitter hosts a lot of inadvertently smart people, some actually read between the lines in the singer’s tweet and derived a meaning in it. People went a notch ahead and claimed that Shaan’s tweet was actually meant to criticise Sonu Nigam. The Bhool Ja singer though didn’t let it go. He slammed the criticisers and humble asked them to change their thinking. Here’s what all happened:

I pledge not to tweet or retweet anything that Spreads HATE and DIVIDE within us and between us. You could do that too.

This what a Twitterati replied: 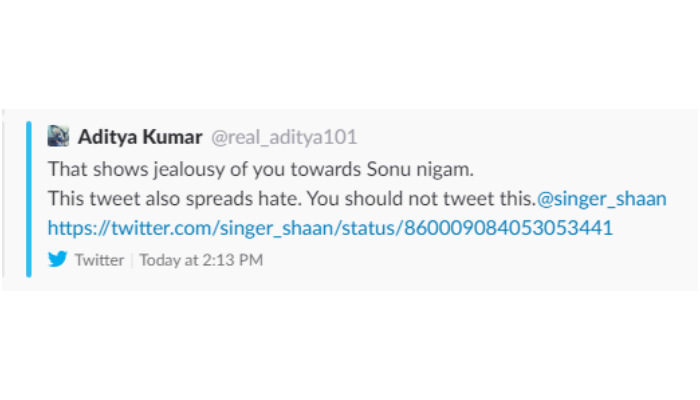 This is how Shaan gave it back:

That is the most twisted and pathetic interpretation of a simple and genuine Intention…
Aditya!! Apni soch ko badlo. #StayPositive https://t.co/f1DnXOYOxD

We can’t really comment on what Shaan intended, we don’t know him personally. All we can still say is that why would a singer get involved in a matter which is now over 15 days old. Meanwhile, here’s how they rock the stage when they perform together: