Emotions always run high during an India-Pakistan match. In the end, there’s always one set of fans complaining about their sporting heroes letting them down. After the not-so-close match between India & Pakistan in Old Trafford at the ongoing ICC Cricket World Cup, it was understandable that some of the Pakistani fans would be disappointed by the (lack of) showing of their national side. However, in the midst of the conversation around the Pakistan captain’s monstrous yawns and far-from-ideal physique, someone took on veteran batsman, Shoaib Malik and his wife (Indian tennis star) Sania Mirza, by putting up a video of them having dinner together. 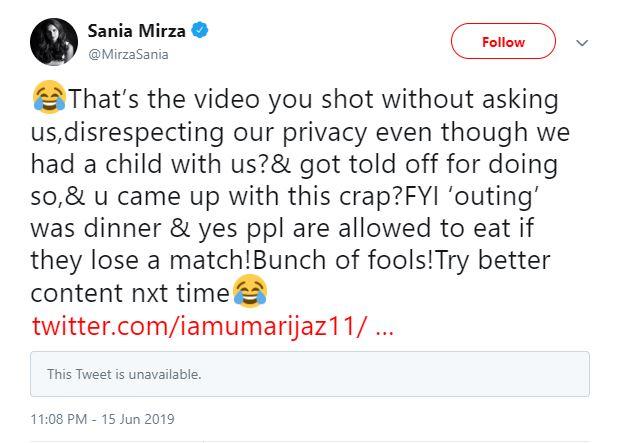 The video (which has now been deleted) seemed to be claiming that this was recorded the night prior to the India-Pakistan match, reflecting on the players’ laid-back attitude. And what it also did, was put out an unverifiable piece of information – that Shoaib and Sania took their baby boy (barely a year old) to a Sheesha club. The video quickly went viral, and Sania Mirza put out a clarification stating that they did go out for dinner, and that ‘people are allowed to eat’ even if they lose a match. Fair point. 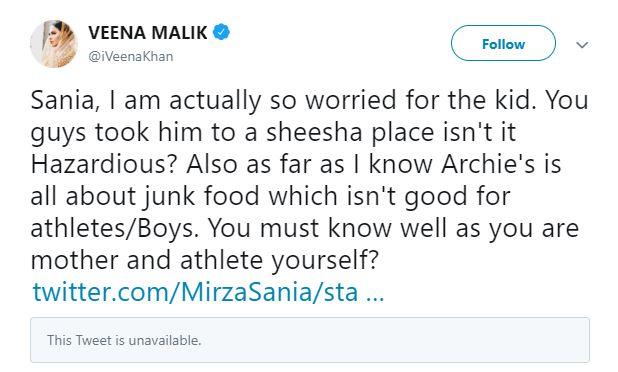 Things got murky when Pakistani actress, Veena Malik, jumped on to Sania Mirza’s clarification tweet by questioning Sania why she had taken her baby to a Sheesha club, and why couldn’t they (as athletes) choose a healthier place for dinner. Yes, she did that. On record. To which Sania Mirza replied by reiterating her clarification and politely asking everyone to mind their own business, considering she wasn’t the ‘dietician, mother, principal or teacher’ of the Pakistan cricket team. 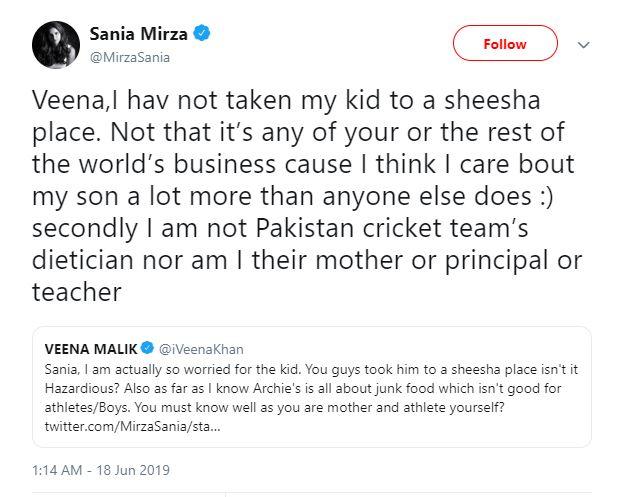 Sania Mirza, reportedly, even lost her cool in her second reply to Veena Malik’s tweet, where she slut-shamed the actor for her ‘not-so-decent magazine cover’ and what example was she setting for her own children. Mirza apparently deleted her tweet, and rephrased it to the relatively less controversial – “To know when they sleep,wake up and eat… thank you for your concern though .. means a lot.”

Have some guts & don’t delete ur tweets.Fortunately the technology has progressed so much that people can’t deny their acts.Oh the magazine’s cover u mentioned had morphed images.Also I can bringup all the controversies U have ever had bt I would rather not divert the discusion. pic.twitter.com/8qednFvEBz

Loyalties are understandably split for Sania Mirza during India-Pakistan matches, but the level of discourse around these victories and losses is shamefully low. The 22 men from the two teams upheld the spirit of the game on the field, something the fans can probably imbibe from their sporting heroes. Also, getting personal with insults for the players of the losing side, that’s just like a no-go.