Salman Khan has played a major role in giving the launch pad for a Bollywood career to many. The Bhaijaan as he his famously called dived into the debate of nepotism and said he would never recommend a family member or a friend if he doesn’t think they are deserving. Salman Khan, who will be next seen with his brother Sohail Khan in Tubelight, said this is an unsaid rule in the Khan family and everyone knows that.

Speaking about nepotism and why he cast Sohail for the upcoming Kabir Khan directorial, Salman Khan said that Sohail was cut out for the role. He said more than the fact that Sohail Khan is his brother, the point that the script demanded him was important. Hinting that people are overlooking this, Salman Khan narrated an incident where he revealed Sohail refused to do Maine Pyaar Kyon Kiya. In 2005 release, Salman and Sohail were cast for characters who fought to win over the girl, played by Katrina Kaif. However, on the first day of the shoot, Sohail asked the makers to get Saif Ali Khan on board, leaving everyone flabbergasted. After a lot of convincing Sohail agreed to the role.

So was history repeated during Tubelight as well? This time around Sohail was told by Salman about the plans of Kabir Khan to offer him the movie. After hearing the script, Sohail was convinced to do the role.

Wading into the conversation about him giving roles to friends, Salman Khan gave the example of Partner, the 2007 release, which served as a comeback for Govinda. Defending that choice of cast, Salman said Govinda seemed perfect for the role. He also gave the example of Dabangg and added he was offered the movie during his not so glorious days to add weight to his argument.

Also read: Salman Khan’s comment on Pakistan is a stern warning to warmongers

“We would never miss family and friends with work. I have never done it so far. So whenever a Dabangg comes or a Partner comes, during the days I was dipping down, they were the ones who gave me my best films. When they (Sohail and Arbaaz) have done smaller films, they haven’t told me to shoot for five days for a cameo. We are aware of these things,” Salman Khan said. 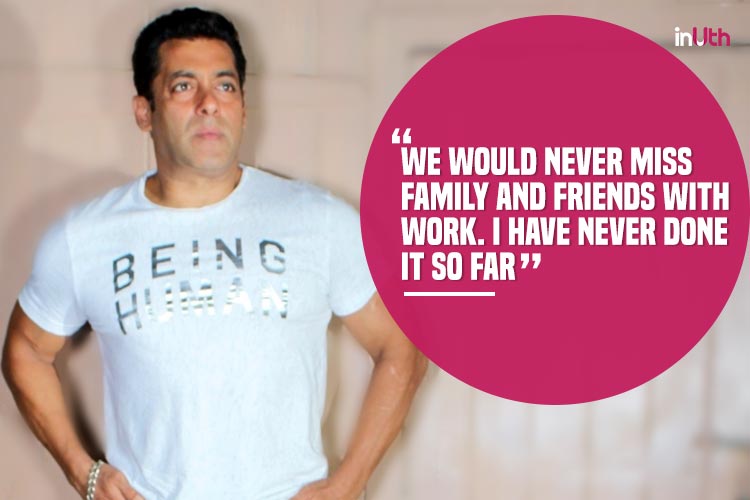 Also read: Katrina Kaif opens up about how Salman Khan supported her during her initial days of Bollywood career