Salman Khan and Katrina Kaif will reunite after five years in upcoming spy flick Tiger Zinda Hai that will hit the theatres at the end of this year. The duo was a popular Bollywood couple before parting ways years ago. But the actors share a cordial relationship and have never spoken a word against each other. At present, both the stars are shooting for TZH in and were present at the IIFA awards press meet recently.

During the interaction with the media, both Salman and Katrina shared funny moments while speaking about the award function. This year, IIFA awards will be held in New York from July 13-15.  When asked whether Katrina found herself when Salman continues to pull her leg with his witty punchlines, the Baar Baar Dekho actor refuted saying,” Not at all. With Salman, its always entertainment and wonderful. He’s like a continuous TV show and you are happy watching him.”

“It is not at all embarrassing and he has a lot of love to give it to the people around him,” Katrina added further.

Also present at the event was Alia Bhatt, who has recently won her first Filmfare Award for Udta Punjab. A journalist asked Alia and Katrina where they would head after the IIFA event ends. To which, the Dear Zindagi actress said she would readily go anywhere Katrina took her. Meanwhile, the Dabangg Khan interrupted and said,”Katrina will go wherever I take her.” His response evoked applause from the audience while Katrina blushed. 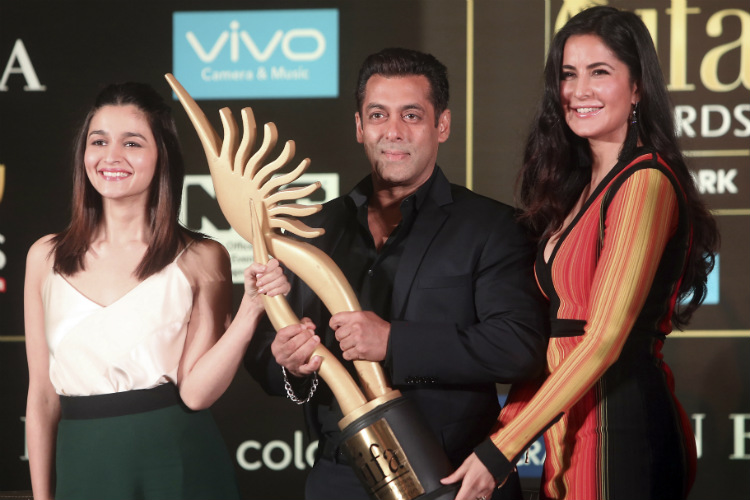 A journalist asked Alia when she would share the screen space with Salman in a film. Katrina said,”Please spare Alia for Varun Dhawan and Salman for me,” she said.